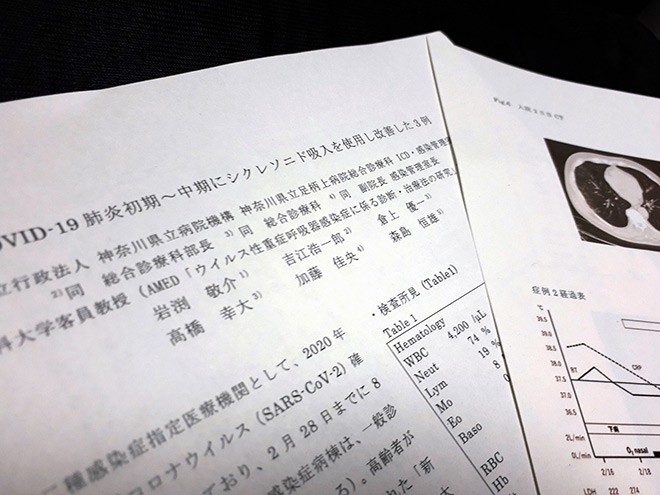 Japanese researchers have discovered that administering a steroid inhalant for asthma helped improve the conditions of three patients infected with the new coronavirus.

The scientists, primarily from the Kanagawa Prefectural Ashigarakami Hospital, said in a recent report that they expect the medicinal preparation to be useful in treating patients infected by the pneumonia epidemic.

“The agent could be the first option for pneumonia-affected individuals to choose to help alleviate symptoms as quickly as possible,” said Keisuke Iwabuchi, a doctor at the medical center, during an interview with The Asahi Shimbun.

All three patients were passengers of the Diamond Princess cruise ship, which was put under quarantine for two weeks in February in Yokohama Port.

A woman in her 70s was hospitalized on Feb. 11 after her infection was confirmed. As the individual complained of lethargy and was virtually unable to get out of bed, an anti-HIV drug used in China and elsewhere was administered from the fourth day of hospitalization.

The treatment only led to apparent side effects including loose bowels and a lack of appetite, and the pneumonia symptoms remained. Physicians stopped using the anti-HIV drug on the ninth day.

After administering a steroid inhalant known as ciclesonide from the 10th day, the doctors found her body temperature began dropping on the 11th day, enabling the woman to walk inside her hospital room on her own power on the 12th day.

Because an improvement in inflammation of the lungs was reported and the results of virus tests conducted on the 15th and 16th days were negative, the woman was released from the hospital on the 18th day.

Only ciclesonide was administered from their fifth day of hospitalization, eliminating the need for supplementary oxygen. Their conditions improved so dramatically that they were able to eat all of the meals they were served in the hospital.

As the two patients still tested positive on the 12th day on Feb. 27, the treatment continued, according to the report.

Based on the findings, the report describes ciclesonide as “having the potential of stopping pneumonia symptoms from considerably worsening.”

Whereas no adverse effects have been reported, the scientists will examine cases at other medical facilities jointly with such institutes as Aichi Medical University to confirm the chemical’s effectiveness.

Iwabuchi, however, noted that ciclesonide should not be used for treating patients with mild conditions.

“The agent should not be administered to those who have simply caught a cold without due consideration, since that could lead to an increase in the number of drug-resistant viruses,” he said.