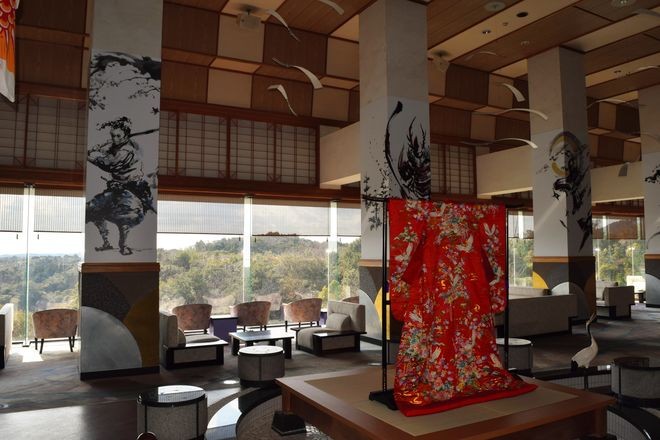 To express a "stereotypical Japan," a kimono is on display in the lobby while samurai and other icons are drawn on the pillars. (Takunori Yasuda)

TOBA, Mie Prefecture--Although it doesn't sound like anything out of the ordinary, a traditional ryokan inn complete with an onsen facility that opened in the Kuzakicho district here is much more unconventional behind closed doors.

Keisen is aimed exclusively at individual tourists from overseas and serves no meals, while aiming to entertain foreigners with a "stereotypical Japan" experience.

Because such a business model is unusual, it could set an example for other hot spring resort operators struggling to attract visitors, officials say.

"It may be rare in the country for an onsen inn to exclusively target foreigners. I think it is a challenging effort that could lead to developing a new customer base," said Yuya Koshio, chief of the Mie Prefecture tourism policy section.

Keisen, whose hot spring water comes from the Jindai Onsen resort, is operated by Kaiei Ryokans in Minami-Chita, Aichi Prefecture, which runs 18 hot spring inns and hotels across the country.

Keisen was originally opened by a local company in 1997. But its earnings deteriorated after the number of Japanese group visitors, who made up the majority of its customer base, declined.

Kaiei took over the management immediately after it was closed in 2016, but the inn had remained closed after its baths and other facilities were damaged in a typhoon in October 2017.

"Demand from Japanese group visitors continues to fall each year. We couldn't attract customers after we took over the management and faced a rough going," recalled Makito Nakai, a senior member of the company.

Kaiei took note of foreign tourists who shied away from tours and whose number sharply increased before and after the 2016 Ise-Shima G-7 summit.

Keisen has no fixed-line phones, meaning that reservations are accepted only through its official website and foreign booking websites used by inbound tourists.

The inn also only accepts cashless payments, so guests must pay their charges online prior to their visits. Guest rooms are locked and unlocked with a security code sent to their smartphones after reservations are made.

To keep operating costs low at the inn, it is staffed with only a few employees, including one receptionist. The only amenity provided is a "yukata" light kimono. Guests must also make their beds and fold their futons.

However, the rates are inexpensive. For example, a Japanese room for four people is offered at 8,000 yen ($74.60) per night. A large karaoke room and ping-pong tables were kept intact for foreign travelers to enjoy the onsen ryokan culture long cherished by Japanese group visitors.

Although Japanese guests can also lodge at Keisen, Nakai added: "Most of our guests will likely be foreigners. If this business model proves successful, it could be applied to other onsen inn operators suffering from the loss of customers."

According to the prefectural government's tourism policy section, the number of foreign tourists who stayed overnight in the prefecture in 2015, the year before the summit, was 391,740, a record high.

The figure temporarily declined since then, but it is expected that the number of inbound tourists who stayed in the prefecture in 2019 will total around 380,000 thanks to the Rugby World Cup held in Japan.

Prefectural officials have been making promotional efforts to draw visitors from around the world, with a focus on traditional culture values such as "ama" female divers and ninja, as well as a rich variety of marine products and other local dishes, golfing tourism and other attractions.

They also are paying attention to Keisen because it can accommodate individual foreign travelers.

However, the number of foreign tourists will likely decline in 2020 due to the new coronavirus epidemic that is rapidly spreading across the world.