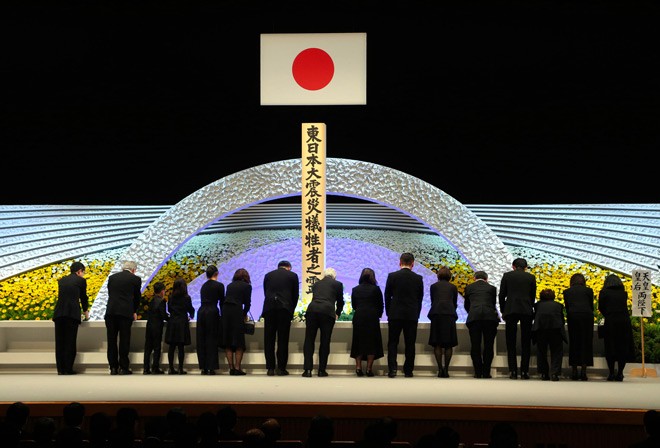 Bereaved family members offer flowers at the eighth memorial ceremony of the Great East Japan Earthquake and tsunami at the National Theater in Tokyo on March 11, 2019. (Pool)

Concerns over the new coronavirus outbreak have forced the government to cancel its ninth annual memorial service for the 2011 Great East Japan Earthquake, expected to draw about 1,000 attendees.

The government decided on the cancellation on March 6 at a Cabinet meeting.

“Now is the time to do everything we can to prevent the virus from spreading further in Japan,” Prime Minister Shinzo Abe said in a statement.

Abe said he will offer a silent player to the disaster victims at the prime minister’s office on March 11 along with giving a commemorative speech.

Initially, the government considered holding a smaller ceremony with around 600-700 attendees by limiting admission.

However, considering possible large-scale infections, Abe urged large events to be canceled, postponed or downsized, as well as all elementary, junior high and high schools to close temporarily.

As memorial ceremonies and related events have been continuously called off, downsized and postponed even at disaster sites, the government also decided to cancel its annual memorial ceremony.

The government’s memorial ceremony for the victims of the 2011 earthquake and tsunami has been held annually at the National Theater in Tokyo’s Chiyoda Ward since 2012.

Since 2017, Prince Fumihito, now the crown prince, has delivered the address.

Around 1,000 people including Abe and representatives of industry and government had been in attendance. In addition, about 700 members of the public would visit to offer flowers.

In January, the government announced that next year’s memorial event, the 10th anniversary of the disaster, will be the final one.