NHK chairman contradicts own statement about board meeting 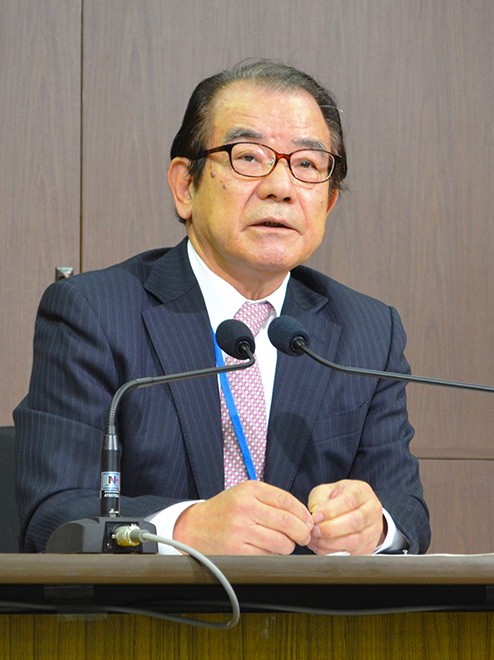 Shunzo Morishita, chairman of the Board of Governors at Japan Broadcasting Corp. (NHK), attends a news conference in December. (Asahi Shimbun file photo)

The chairman of Japan Broadcasting Corp. (NHK) changed his story about discussions at a board meeting but denied exerting pressure concerning a TV program that infuriated the Japan Post Group.

Shunzo Morishita, who heads NHK’s Board of Governors, told the March 5 session of the Lower House Internal Affairs and Communications Committee that the meeting in 2018 did indeed discuss the content of the “Close UP Gendai +” program that highlighted questionable sales practices concerning Japan Post Insurance Co. policies.

The program was broadcast in April 2018, and a follow-up piece was planned. However, the sequel was abandoned after Japan Post Group protested an NHK video on social media seeking information to use in the program.

Suspicions have arisen that the NHK Board of Governors may have interfered with programming at the public broadcaster, a violation of the Broadcast Law.

Japan Post Group officials not only criticized the video on social media, but they also asked the Board of Governors on Oct. 5, 2018, to look into a comment made by an executive of the program.

The executive had apparently told the Japan Post Group that the NHK president was not involved in programming.

On Oct. 23, 2018, the Board of Governors held a closed-door meeting where Ryoichi Ueda, the then president, appeared.

Morishita was asked about that meeting in the Diet in October 2019, when he was still acting chairman of the board.

“We had no discussion at all about program contents,” Morishita said at the time.

But on March 5, he changed his tune.

“The president attended (the meeting) so we could confirm the situation and process behind the program,” he said. “We had a free exchange of views. We also expressed our views on the program as well as the video posted to social media.”

“We never made any specific instructions about production methods, and there was no damage to freedom in program editing or to NHK’s independence and autonomy,” he said.

Sanae Takaichi, the internal affairs and communications minister, was asked on March 5 about Morishita’s latest comment.

“There were elements that I could not sufficiently understand,” she said.

When pressed further, she said at a March 6 news conference that while there appeared to be no violations of the Broadcast Law, it was not desirable for NHK governors to make comments that could be misunderstood as interfering in specific programs.

Takaichi called on NHK to disclose more information about the closed-door meeting.

Other NHK sources said criticism arose at that board meeting, including from Morishita, about how the program was put together.

Hiroyoshi Sunakawa, a professor at Rikkyo University specializing in media studies, said, “If the Board of Governors criticized a specific program in front of the NHK president, who is the top official in charge of programing, there is the possibility that such criticism could flow down to those who actually work on program production.

“That would constitute a breach of the Broadcast Law, which fundamentally bans interference in programs.”

(This article was written by Kenro Kuroda and Tomoya Fujita.)