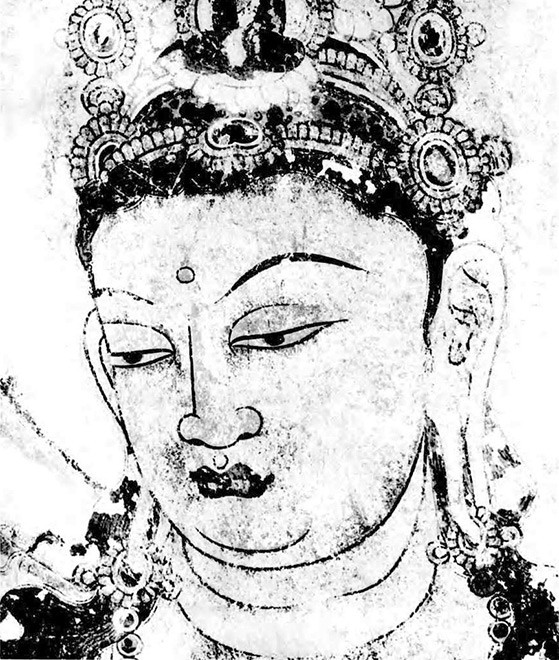 A partial enlargement of a picture of the mural of a Buddhist saint taken by Matsutaro Tanaka during the Taisho Era. There are no scratches on the left eye. (Captured from an academic book about Horyuji temple)

Some 150 glass photographic plates were discovered that show treasured seventh-century murals from World Heritage site Horyuji temple before they were scorched in a 1949 fire.

The plates found at the Tokyo National Museum in Tokyo’s Ueno district offer invaluable insight to the original state of the murals of the temple’s Kondo main hall in Ikaruga, Nara Prefecture, which are the oldest existing Buddhist paintings in Japan.

The murals are considered among the treasures of ancient East Asia, which include murals of the Dunhuang Caves in China. Most lost their colors after being scorched in the blaze.

They were later moved to a depository in the temple grounds.

The plates, used in 1916 during the Taisho Era (1912-1926) to photograph the murals, were known to exist, but their whereabouts had remained unknown until now.

Other original glass photographic plates used to take pictures of the murals in 1935 were found and are designated as important cultural properties.

But the newly discovered plates are older and show the original state of the murals before they were scorched by the fire, making them even more valuable.

The plates, whose surface is coated with sensitive materials, were put into practical use at the end of the 19th century, but subsequently replaced by more conventional film.

Museum staff, including Ai Seya, the head of the preservation and restoration division of the museum and an expert on art history, found the plates at a depository in the museum in January.

Dozens of plates, measuring about 30 centimeters by 25 cm, were stored in three wooden boxes each.

The question of how to preserve the original murals had been a topic for debate since the Meiji Era (1868-1912).

In 1916, a committee to research ways to preserve the murals was set up in the education ministry at the suggestion of Tenshin Okakura, a researcher of art history.

Matsutaro Tanaka (1863-1949) then photographed the murals at the request of the committee.

The glass plates found this time are believed to contain both the original plates used when Tanaka took the photos and duplicates.

Tanaka took pictures of four big murals about three meters high and 2.6 meters wide, in which groups of Buddhist gods, including the “Amida Jodo-zu” (Image of Amithaba’s Pure Land), are drawn, by dividing them into 15 sections.

He also photographed eight small murals about three meters high and 1.5 meters wide, in which the image of the Buddhist saint is drawn, by dividing them into 10 sections.

The pictures were included in an academic book published in 1918 about Horyuji temple.

“The plates are an important material that reveals the original state of the murals before they were badly damaged,” said Haruyuki Tono, the head of the center of utilizing cultural assets in Ikaruga town, and an expert on the ancient history of Japan.

“Some of the plates, including those of the mural of the Buddhist saint, do not have scratches that are visible in pictures taken during the Showa Era (1926-1989),” Tono said.

“I think the plates are worthy enough to be designated as cultural properties."

Photo prints from the plates will be displayed at the special exhibition, “Passing on Cultural Heritage: Buddhist Murals and Sculptures of Horyuji,” to be held at the museum this spring, co-sponsored by The Asahi Shimbun.