Hokkaido in grip of economic crisis over ‘state of emergency’ 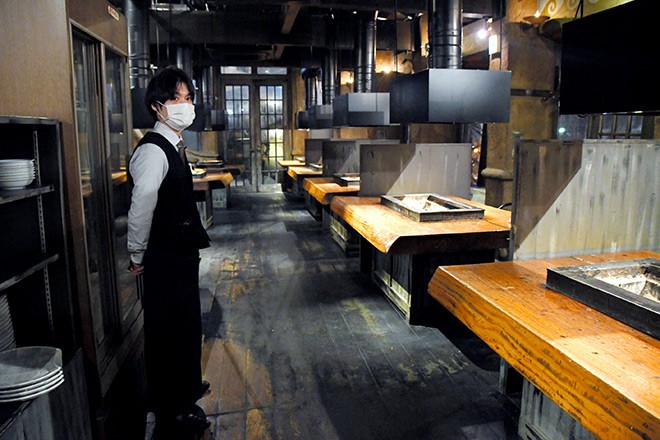 Business is slow at the Noah’s Ark ‘izakaya’ restaurant in Sapporo as reservations for about 1,000 customers have been canceled over the past month or so. (Minami Endo)

Hokkaido Governor Naomichi Suzuki's declaration of a "state of emergency" over the coronavirus outbreak is having a huge impact on local businesses.

Residents of the main northern island have taken the edict to heart, and few people are venturing out other than to shop for essential items or for reasons of necessity.

With 90 confirmed infections as of 11 p.m. on March 6, Hokkaido has the largest number of cases among the nation’s 47 prefectures. It is also a popular destination for visitors from China and South Korea, but tourism has taken a deep dive in recent days.

Suzuki requested local residents on Feb. 28 to refrain from congregating in major cities during weekends in the hope of containing the spread of the coronavirus.

As a result, the popular Susukino entertainment district of Sapporo, the provincial capital, is struggling to attract customers.

The Noah’s Ark izakaya restaurant in Susukino typifies the situation facing business enterprises here. At this time of year, it would normally be packed and serving “robatayaki” food grilled in front of customers as company parties are held to welcome and bid farewell to those in line for job transfers with the new fiscal year starting April 1. The restaurant was fully booked up until last weekend when Suzuki declared the state of emergency. In the event, all those reservations were canceled.

As the coronavirus scare took hold in Hokkaido, cancellations started ramping up from mid-February. To date, reservations for around 1,000 potential customers have been canceled.

With sales down by as much as 90 percent in recent days, the 20 or so part-time staff were instructed to take time off as of March 1.

Koichi Hagiwara, 39, who heads the company that operates the restaurant, compared the situation to September 2018 when a major earthquake struck Hokkaido.

“Back then, customers began returning after about one week, but the damage this time is much larger because we have no way of knowing what will happen in the future,” Hagiwara said.

At the Mensho Kiyomasa ramen restaurant in Sapporo’s Chuo Ward, owner Ryosuke Kudo’s main worry now is “what to do in order to remain in business.”

During the lunch break on March 4, the restaurant had zero customers and sales overall have declined to about one-third of average.

Because the central government has not yet decided on specific support measures for businesses affected by the coronavirus outbreak, Kudo, 40, remains undecided whether to temporarily close his doors.

Hotels on Hokkaido are also reeling from a lack of guests.

The Tsuruga Group operates a number of hotels, including five in the area around scenic Lake Akanko. Three of those hotels will temporarily close for about a month from the end of March.

Not only Chinese tourists, but also domestic travelers, have canceled reservations in droves. As of March 4, reservations for the month were only about 20 percent of 2019 levels.

“I can only pray that the outbreak comes to an end quickly because we have no idea how long this unusual situation will last,” the manager said.

Cancellations were also rampant at the Miyama no Iori Iwai hotel at the Noboribetsu Karurusu Hot Springs area. The hotel had only a handful of reservations for March. As a result, it drastically cut its rates from 10,300 yen ($98) for one night’s stay and two meals to just 4,980 yen. Similarly, the charge for just staying at the hotel without meals has been cut from 6,800 yen to 2,980 yen.

Word of the deals is spreading on the Internet and reservations are slowly returning.

“We will not be able to make a profit because the discounts do not allow it, but we needed cash revenues in order to continue with payments,” said an employee in charge of reservations.

(This article was written by Minami Endo, Junichiro Nagasaki and Osamu Uchiyama.)