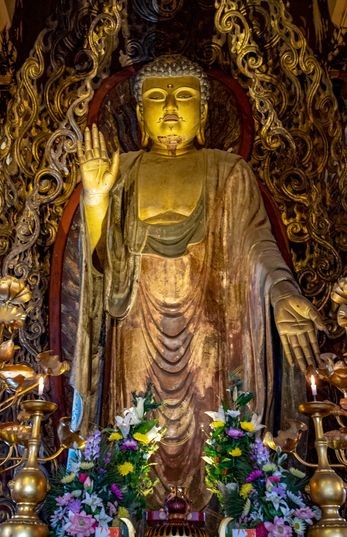 KYOTO--Cultural properties rarely seen by the public will feature at 16 locations, including some of the city's most spectacular temples and shrines, as part of a spring exhibition organized by the Kyoto Heritage Preservation Association and other institutions.

The Asahi Shimbun is a special sponsor of the event that will begin June 5 and run until June 21 (although there may be slight differences in schedules at individual facilities).

The exhibition's opening was delayed from its initial dates of April 25 through May 10 due to the coronavirus epidemic.

At Kaikoji, which is part of the Sennyuji temple complex in the city's Higashiyama Ward, a 5.4-meter-tall standing statue of Shaka Nyorai will be shown. The statue, designated by the government as an important cultural property, is believed to have been a collaborative work of master sculptor Unkei and his son Tankei from the Kamakura Period (1185-1333).

Commonly referred to as "Joroku-san," the total height of the statue including its mount and halo is approximately 10 meters. Its Buddhist frock and "kesa” robe feature gold leaf-coated patterns exquisitely crafted using what is known as the "kirikane" metal foiling technique.

Visitors can get an up-close look at the statue as they walk around the altar in the main hall, which is usually closed to the public.

An admission fee of 1,000 yen ($9.40) for adults (previously 800 yen) and 500 yen for junior and senior high school students (previously 400 yen) is needed to view the exhibits at each of the locations. There may be differences in admission fees, however.

The price hike, the first since 1996, is due to increased operating costs stemming from the increase in the consumption tax rate last October from 8 percent to 10 percent, and other factors. The decision reflects the association's aim of securing sufficient revenues to cover the cost of repair and preservation of cultural properties.

"We will make further efforts to provide places to appreciate valuable cultural properties," an official said.

For more information, visit the association's official website at (http://www.kobunka.com/index.html).