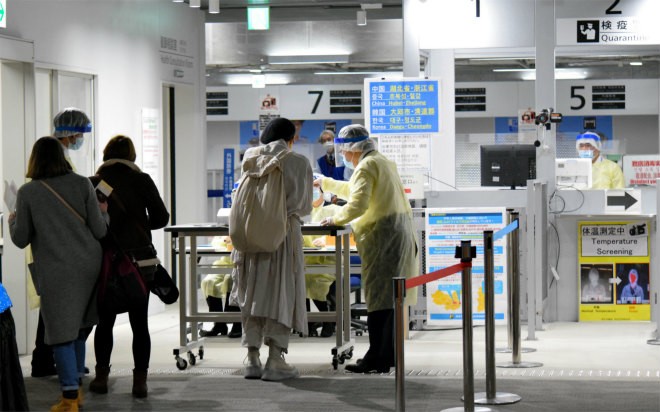 Quarantine officials in protective gear ask each passenger arriving on a flight from Seoul to fill in a questionnaire at the quarantine counter of Narita International Airport on March 9. (Yoshifumi Fukuda)

Japan on March 9 began implementing more rigorous entry procedures for those arriving from China and South Korea as part of efforts to curtail the spread of the new coronavirus.

All visitors, including Japanese nationals, are required to remain at home or a hotel in self-imposed quarantine for two weeks after their arrival.

Only eight passengers disembarked from a flight from Seoul that arrived at Narita Airport shortly after 8 a.m.

Quarantine officials wearing white protective gear, caps, masks and face guards asked each passenger to fill in a questionnaire. The officials checked where passengers were going to stay and how they intended to get there.

They were told to quarantine themselves and avoid using public transportation for 14 days.

A female resident of Tokyo who went to Seoul on a shopping trip said, “I wanted to stay there a bit longer, but I hastily booked a flight early in the morning after learning that flights to Japan will be suspended.”

She said her family would pick her up by car and will spend the next two weeks relaxing at home.

Two French women who live in Japan on a working holiday program were also on the flight. They spent a week in South Korea for traveling.

“We can’t return to the share house in Tokyo where we are living, so we’ll go to hotel,” said one of the women.

They said they would book a hotel near the airport that was suggested by a quarantine official and ask for a shuttle bus to take them there.

The government began implementing stronger measures on the entry of foreign nationals in February, starting with a ban on those who had been in China’s Hubei and Zhejiang provinces two weeks prior to arriving in Japan.

The measure was later extended to those who have been in South Korea’s Daegu and Cheongdo county in Gyeongsangbuk-do province.