China turns to propaganda to right image in virus ‘war’ 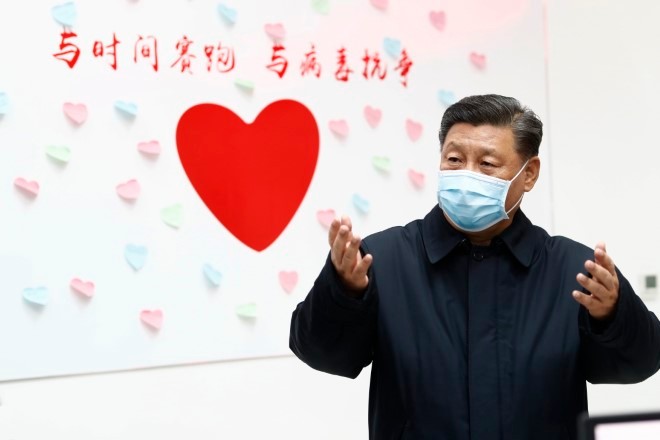 Chinese President Xi Jinping gestures near a heart-shaped sign and the slogan "Race against time, Fight the Virus" during a Feb. 10 inspection of the center for disease control and prevention of Chaoyang District in Beijing. (AP PHOTO)

BEIJING--As the rest of the world grapples with a burgeoning virus outbreak, China’s ruling Communist Party has deployed its propaganda playbook to portray its leader as firmly in charge, leading an army of health workers in a “people’s war” against the disease.

The main evening news on state TV regularly shows President Xi Jinping and his underlings giving instructions on the outbreak or touring related facilities. Coverage then segues to doctors and nurses on the front lines, drawing on a tradition of upholding model workers and the importance of sacrifice on behalf of the people and the party.

For the Communist Party, the epidemic is both a risk and an opportunity. It seeks to avoid blame for any mishandling of the outbreak, notably a slow initial response that allowed the virus to take hold. Conversely, it seeks credit for overcoming the crisis, enhancing the legitimacy of its rule.

State media, a tightly controlled internet and mass mobilization campaigns have all been harnessed for the effort.

“Upbeat, if emotional, state messaging leaves the impression that self-sacrificing citizens, national unity, and enlightened leadership will inevitably triumph in China, as the fight against the virus shifts beyond the country’s borders,” said Ashley Esarey, a specialist on the Chinese media at the University of Alberta.

The tried and true formula appears to remain effective at promulgating the party’s version of events, though the rise of social media is an ever-present challenge. A growing minority has long questioned the party line, but even many of them accept it out of habit or a lack of alternatives.

Most passively embrace a narrative that is repeated over and over, said Steve Tsang, director of the China Institute at the University of London’s School of Oriental and African Studies.

Li Desheng, a 22-year-old student who said news webcasts are his main source of information, commended the response of the party and the government, saying they had proven effective at stopping the spread of the virus.

“There is a Chinese idiom that says, ‘Point to a deer, call it a horse,’” the philosophy major said in an interview conducted via instant message. “If you say a deer is a horse, then that is a distortion of fact. When watching a news webcast... at least at present, I think a deer is still called a deer, and a horse is called a horse, so I believe the report."

It’s not just a matter of what’s shown, though--it’s also what’s omitted. State media trumpeted the throwing up of new medical facilities in a fortnight without reporting on the woes of people unable to find a hospital bed that necessitated the Herculean effort.

It touted crackdowns on wild animal markets and plans to shut them down, without questioning why they hadn’t been sufficiently regulated since SARS, a similar virus outbreak in 2002-03.

June Teufel Dreyer, a China expert at the University of Miami, said the party may have lost credibility with what she called “engaged public opinion,” but that it’s difficult to know what portion of China’s 1.4 billion people that represents.

Zhou Songyi, another 22-year-old student, said she doesn’t find any useful information on the epidemic from the official People’s Daily newspaper or state broadcaster CCTV, citing stories that, even if true, have a PR agenda rather than seeking to inform the public.

Social media has given her digital-savvy generation almost instant feedback on some state-media reports, though critical comments are often removed by the country’s internet censorship.

“The battle for truth-telling on the internet is another sign that people do not simply trust in the government," said Elizabeth Economy, director of Asia studies at the Council on Foreign Relations in New York. She added, though, that the propaganda works on those who believe in the party and want to be comforted and persuaded.

The core of the approach is to stifle any criticism while providing positive role models and showing the party as China’s only real hope.

China has barred citizen journalists from popular social media platforms after they reported on overcrowded hospitals and other problems. Non-state media outlets such as the magazine Caixin have done some independent reporting but stopped short of criticizing the leadership.

“The medics are portrayed as heroes not because of their dedication as health professionals, but because they are party members,” said Anthony Saich, a China expert at Harvard University. He believes the crisis has damaged confidence in Xi’s leadership to a degree but won’t have a lasting impact.

The health workers form the basis of the people’s war, a term adopted early on by Xi. A recent CCTV evening news broadcast showed him visiting military health units. Everyone maintained a safe distance from each other, following the government-ordered protocol, their mouths and noses covered by protective masks.

“Wars invite people to cast aside their squabbles and dissent and to come together," said David Bandurski of the China Media Project at the University of Hong Kong. "Wars make heroes--and heroes are the stuff propaganda thrives upon."

Nationalist campaigns have worked before, channeling anger away from the party in the SARS outbreak, territorial disputes with Japan, last year’s Hong Kong protests and the ongoing trade war with the U.S.

This time, the official coverage of the virus may help blunt any lasting political damage to Xi and the party’s authority, even as the social and economic costs of the outbreak exact a rising toll. More than 3,000 people have died in China from the virus.

“The leadership has been very eager to write the happy ending to this story before anyone really knows what the world is dealing with,” Bandurski said.