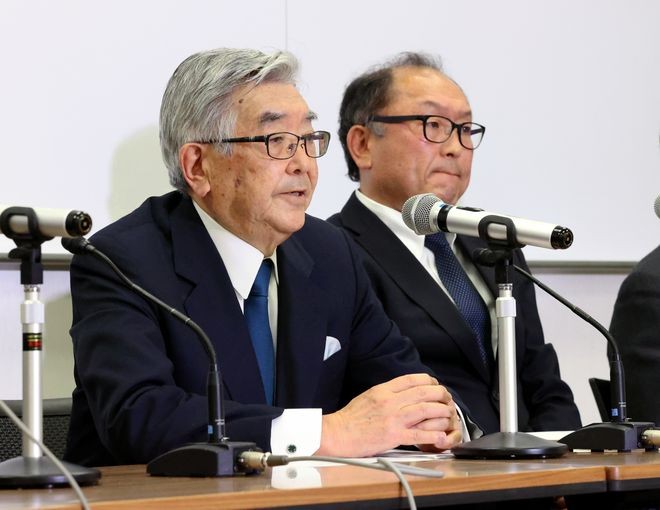 Atsushi Saito, left, commissioner of Nippon Professional Baseball, and Tsukasa Imamura, president of the Yomiuri Giants, attend a March 9 news conference when the delay to the start of the season was announced. (Tatsuya Shimada)

Nippon Professional Baseball pushed back Opening Day and the J.League delayed the resumption of its soccer season as the novel coronavirus outbreak further hit the sports world in Japan.

NPB on March 9 announced that the regular season would not begin on March 20 as scheduled. The organization is seeking to begin playing ball in mid-April, but no definite date was given.

“We seek the understanding of fans about our decision, which was made to protect the players and staff, but above all the fans,” NPB Commissioner Atsushi Saito said at a March 9 news conference. “Our priority will be on playing a 143-game season with fans in the stands.”

The last time NPB delayed the start of its regular reason was in 2011, when the Great East Japan Earthquake and tsunami struck.

The J.League, which had suspended games after the first round because of the outbreak, also announced on March 9 that the season would not resume on March 18 as originally planned.

The professional soccer league plans to restart play on April 3.

The government has asked organizers to postpone, cancel or curtail cultural and sporting events to help prevent the spread of the new coronavirus.

As a result, baseball spring training games are being played in empty stadiums, and the Spring Grand Sumo Tournament in Osaka is also being held without any fans in the stands.

Representatives of all 12 NPB teams who met in Tokyo on March 9 agreed that they would not hold regular season games without fans.

Another NPB meeting was planned for March 12 to decide on when and how to start and schedule the season.

Sources said several scenarios have already been thought up.

One idea is to push back the Japan Series and rearrange games to fit that schedule. Off-days could be used to play games to make up for lost time.

NPB had initially planned to suspend the season during the Tokyo Olympics, but ball games could be played during that approximately two-week period as well.

The decision to postpone Opening Day came after NPB heard the opinions of experts on infectious diseases who have been asked to serve on a committee by NPB and the J.League.

A liaison meeting including committee members and also involving the J.League was held on March 9.

The committee chair, Mitsuo Kaku, a specially appointed professor at Tohoku Medical and Pharmaceutical University who specializes in controlling infectious diseases, said after the meeting that delaying the baseball season was only natural given that the number of infected people is increasing.

The experts also pointed out that NPB clubs and J.League teams were insufficiently prepared to protect huge numbers of fans at their stadiums from the contagion.

The experts suggested several measures to prevent cluster infections at the stadiums, such as prohibiting those with fevers of 37.5 degrees or higher from entering and thoroughly disinfecting the stands, toilets and locker rooms.

However, thermometers and alcohol disinfectant have been in short supply around Japan since the coronavirus outbreak began.

Under such circumstances, the experts said, it would be too risky to go ahead with the games.

J.League Chairman Mitsuru Murai also indicated that teams might be asked to urge fans to change how they cheer to reduce the risk of infection. Such measures include not cheering in loud voices and avoiding high-fives and hugs after goals are scored.

Meanwhile, baseball players wanted to know when the season would actually begin so they could train accordingly.

“From the standpoint of players, I hope an early decision will be made on when the season starts because that would allow us to prepare better as now is a time when every single day is very important,” said Nobuhiro Matsuda, an infielder with the Softbank Hawks.

Daichi Osera, who is slated to be the Opening Day starting pitcher for the Hiroshima Carp, said, “I hope we will be able to play ball without worries and the fans can return to a normal lifestyle of watching games as soon as possible.”