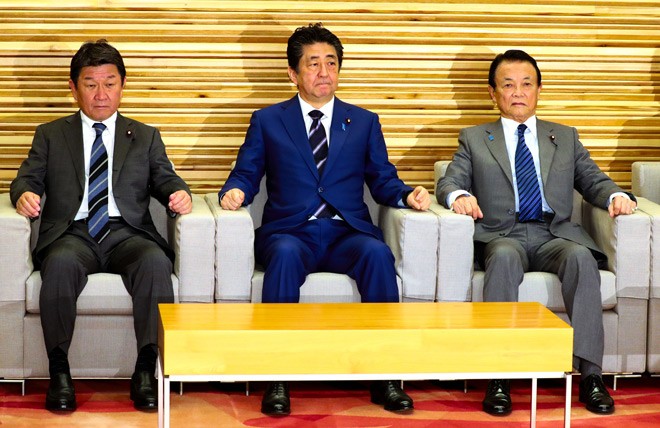 Prime Minister Shinzo Abe, center, and the members of his Cabinet prepare to enter a meeting on March 10 to approve a bill allowing the government to deal with the coronavirus outbreak. (Takeshi Iwashita)

Prime Minister Shinzo Abe’s Cabinet on March 10 approved a draft bill to revise a 2013 special measures law to give the prime minister and the government greater authority to deal directly with the coronavirus outbreak.

The bill would add the new coronavirus to the infectious diseases targeted under the special measures law for a two-year period that would be separately decided by a Cabinet order.

The bill was to be submitted to the Diet later on March 10 and agreement has been reached with the opposition parties to pass the bill into law by March 13.

The special measures law gives the prime minister authority to declare a state of emergency after outlining the time period and geographic area that the declaration would cover. Such a declaration would be issued under the law when a situation threatens enormous impact on the lives of the people and the domestic economy.

Once a state of emergency is declared, prefectural governors would temporarily have the authority to greatly restrict the daily lives of local residents by requesting or ordering them to refrain from unnecessary outings as well as restricting the holding of various events.

Because of the wide effects on the public, the opposition parties had asked for prior Diet consent before such a declaration is made rather than the current provision of reporting to the Diet after the declaration has been made.

However, at his morning news conference on March 10, Chief Cabinet Secretary Yoshihide Suga did not directly respond to the opposition parties' request.

“I am of the understanding that the situation right now does not call for immediately issuing a declaration of a state of emergency,” Suga said.

The Abe Cabinet also agreed to designate the current government response to the coronavirus outbreak as an “historic emergency situation” in terms of guidelines for management of public documents.

Such a designation means that minutes of government task force meetings to deal with the coronavirus and other relevant documents will have to be preserved. This is the first time such a designation has been made since the provisions were approved in 2012.

The government also plans to decide on a second round of support measures to deal with the coronavirus. Abe was expected to announce the major new measures at the task force meeting to be held later on March 10.

One measure expected to be in the second package was providing interest-free loans to self-employed businessmen and freelancers who were forced to take time off from work because of decisions across Japan to close schools to prevent a spread of the coronavirus.

Abe asked on Feb. 27 that all schools be temporarily closed, and the measure is expected to last until the start of spring vacation later in March. The measure affects about 13 million schoolchildren and students in Japan.