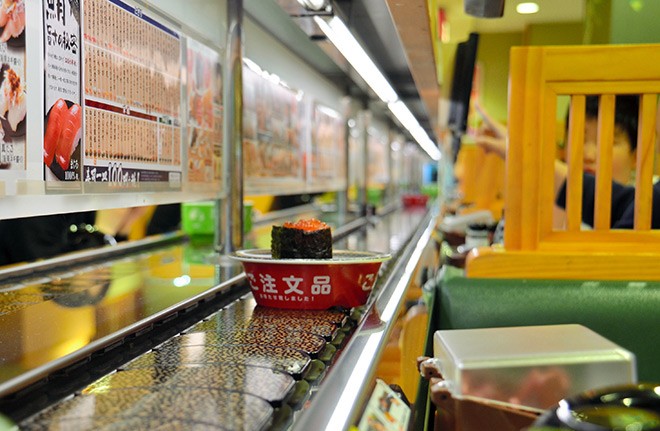 A container labeled an "ordered item" carries sushi on a conveyor belt at a Hamazushi Co. outlet in Tokyo's Shinjuku Ward on March 3. (Shimpei Doi)

Sushi is still available but it now rarely makes the rounds at a popular restaurant chain.

Fears of infection from the novel coronavirus have prompted Hamazushi Co., which operates about 500 conveyor-belt sushi outlets in Japan, to drastically change its operations.

Now, the only sushi items on the conveyor belts are ones specifically ordered by customers on the touch panels at their tables or counters.

And instead of a dish of dried-out tuna rotating around seemingly forever, the only permanent fixtures on the belts are containers of wasabi and sweet sauce.

“It was a big decision not to rotate sushi at rotating sushi restaurants,” said a public relations official at Zensho Holdings Co., the parent company of Hamazushi. “But the move was inevitable in helping to eliminate the fears of customers.”

On the evening of March 3, when the changes were made, families and couples crowded a Hamazushi outlet in Tokyo’s Shinjuku Ward.

Although the sight of the barren conveyor belts elicited some puzzled looks, the customers were generally positive about the measure to prevent infections from sushi pieces that could become contaminated as they pass by diners carrying the virus.

“It is sanitary and good,” said a 19-year-old first-year university student who visited the restaurant with her friend.

A 62-year-old woman who often dines at the outlet with her husband said, “I like my sushi fresh, so sending only the items we order on the rotating belt is good.”