VOX POPULI: Woman fights to save school to honor grandchild who died in 3/11 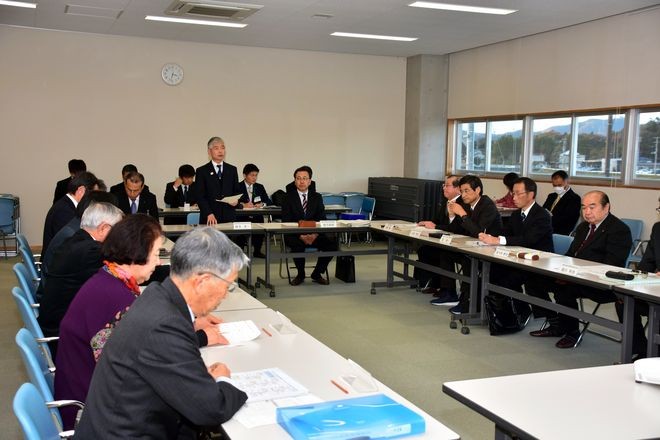 A panel on Fukushima prefectural high school system reforms discusses the issue of merging Shinchi and Soma-Higashi high schools in Soma at a meeting on Nov. 29, 2019. (Asahi Shimbun file photo)

The letter touched me so deeply, I visited its author in the school's home town of Shinchi.

"I attended this school, and so did my daughter and granddaughter," said farmer Namiko Hayashi, 74. "It's earmarked for consolidation with another high school in the neighboring city because of the low birthrate, but I just cannot accept that."

Hayashi is afraid that the loss of the town's only high school will drain the entire community of vigor.

But the real reason she won't give in easily is that her granddaughter, Mizuki Kanno, died in the tsunami only days after graduating from the high school.

On March 3 that year, three generations of the Hayashi clan got together for a birthday party for Mizuki, who had landed a job and obtained her provisional driver's license.

Mizuki's body was found the day after the disaster inside the shuttle bus for the driving school.

"She was a kindhearted girl who never had a bad word to say about anyone," Hayashi said. "I'm sure she wanted to get married eventually and start a family. But at the time, she was just so thrilled to start working."

The tsunami claimed one student of Shinchi High School and eight of its most recent graduates, including Mizuki.

Six years later, the school's student council planted a sal tree in the courtyard to memorialize the nine victims. The tree was named "Omohi no Ki" (tree to remember that day) to express the survivors' collective resolve to never forget the tragedy.

The inexorable decline in the birthrate may some day put an end to Shinchi High School's history, which goes back to the Meiji Era (1868-1912). But even so, I pray that this tree will remain.