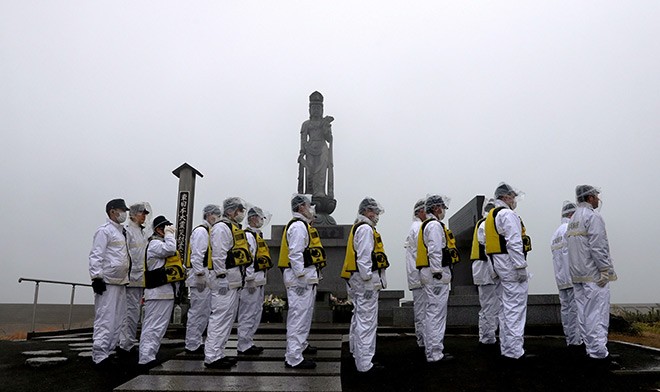 Police officers observe a moment of prayer in the Miyagi prefectural capital of Sendai on the morning of March 10 before they begin a search for people still missing from the 2011 Great East Japan Earthquake and tsunami. (Takuya Tanabe)

More than 45,000 people remain displaced from their hometowns in northeastern Japan nine years after the Great East Japan Earthquake and tsunami that ravaged the Tohoku region and set off a nuclear crisis.

The government's memorial service on March 11 was canceled due to the outbreak of the new coronavirus.

The death toll from the magnitude-9.0 quake and tsunami currently stands at 15,899 with 2,529 people still unaccounted for, according to the National Police Agency.

Figures compiled by the Reconstruction Agency show that 3,739 deaths certified as disaster related were due to deteriorating health or suicide.

The number of evacuees stands at 47,773 spread across the nation. Most of them fled their homes after the triple meltdown at the Fukushima No. 1 nuclear power plant in Fukushima Prefecture.

About 320,000 victims took refuge in makeshift housing at the peak period. The figure now stands at 5,884.

Prefabricated temporary housing units in the three hardest-hit prefectures of Iwate, Miyagi and Fukushima are still occupied by 709 people.

Authorities in the stricken region said 99 percent of projects to elevate land to protect new houses from tsunami had been completed.

They noted that 99 percent of 30,000 planned disaster recovery public housing units have also been built.

But those projects did not stop the exodus of people from the three prefectures. Over the past nine years, about 340,000 people have moved out of the prefectures.

There has been some progress in the rebuilding of Fukushima Prefecture. Evacuation orders were partially lifted for some areas designated as "difficult-to-return" zones in Futaba and Okuma, towns whose jurisdiction covers the crippled nuclear complex, as well as nearby Tomioka.

The JR Joban Line which hugs the coast of the affected region will fully reopen on March 14.

But the government has yet to present a plan for when the ban will be lifted for the rest of a broad swath of no-entry zones in Fukushima Prefecture.

In its basic policy of charting a new road map for rebuilding from fiscal 2021, the government decided to maintain the Reconstruction Agency through fiscal 2030. The agency, which was formed in 2012, was initially expected to be abolished in this fiscal year.

However, the injection of public funds will be sharply reduced to between 1 trillion yen and 2 trillion yen over the five years through fiscal 2025.