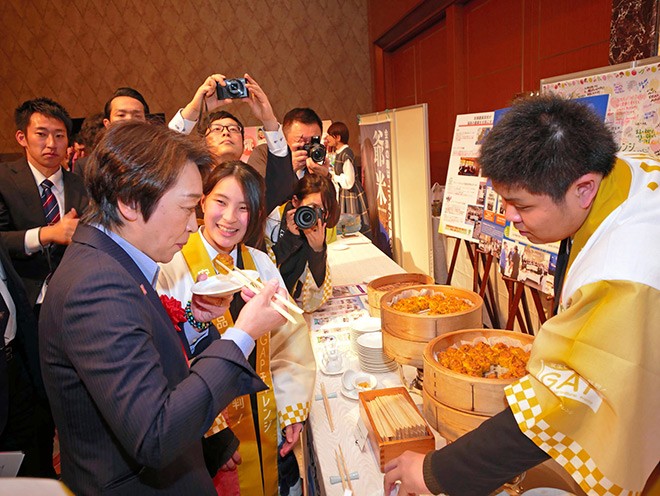 Seiko Hashimoto, the state minister in charge of the Tokyo Olympics and Paralympics, samples food from Fukushima Prefecture at an event held at a Tokyo hotel in January. (Provided by the Fukushima prefectural government)

Prefectural authorities in Fukushima have had nine years to figure out whether local produce is free of radiation and safe to eat, and the answer is a resounding yes.

Moves are now afoot to scale back testing for radiation of farm and livestock products that officials had feared could be contaminated by the triple meltdown at the Fukushima No. 1 nuclear power plant triggered by the March 11, 2011, earthquake and tsunami disaster.

But farmers and ranchers who have had to battle negative publicity about their produce all this time have mixed feelings about how consumers and the overall market will react to the move that will begin from this year.

Rice and beef were most heavily affected in the immediate aftermath of the crisis.

All cattle were tested for radiation, as well as all bags of rice, before shipment to market.

But no animal was found to have radiation levels exceeding government standards since testing began from August 2011.

Likewise, no bag of rice was found to have excessive levels of radiation for over close to five years.

As a result, the Fukushima prefectural government decided to move toward random sampling of cattle and rice from this year.

Those officials are also hoping the Tokyo Olympics this summer will provide an opportunity to eradicate concerns about the safety of Fukushima produce not only in Japan, but throughout the world.

Seiko Hashimoto, the state minister in charge of the Tokyo Olympics and Paralympics, attended an event held in late January at a Tokyo hotel organized by the Fukushima prefectural government to display produce from the prefecture and sampled some of the dishes.

“Through the reconstruction Olympics, we will transmit to the world the delicious cuisine provided by Fukushima," Hashimoto told the gathering. "Today is the kickoff for that endeavor.”

Plans call for making Fukushima produce available every day at the cafeteria within the Athletes’ Village for the duration of the Tokyo Olympics after the Olympic organizing committee signed off on the request by the Fukushima prefectural government.

Prefectural government officials regard the sports extravaganza as the perfect opportunity to showcase the safety of Fukushima produce to the world.

Officials in Fukushima know only too well what problems can emerge when any sign of radiation appears in food products.

In July 2011, cattle in Fukushima were found to have radiation levels in excess of the government standard of 500 becquerels per kilogram. The problem stemmed from hay contaminated with radiation that was distributed mainly in eastern Japan. The finding led to 37 prefectures being forced to test all cattle for radiation.

When Fukushima Prefecture announced it would test all bags of rice for radiation from the 2012 harvest year, it was dealing with a mess left behind by the governor at the time.

In autumn 2011, he declared that Fukushima produce was safe to eat. Before long, however, some Fukushima rice was found with radiation exceeding government standards. The foul-up triggered widespread doubts about the safety of Fukushima food that have continued to this day.

Regaining public trust offered the only way forward, and  prefectural government officials took the unusual step of testing all bags of rice before shipment to market.

Consumers felt reassured and the market price for Fukushima rice gradually increased. It has since returned to levels recorded before the nuclear disaster.

From this harvest year, a few bags of rice for each of about 400 municipalities will be randomly tested for radiation. For cattle, as few as one animal per ranch will be tested from April.

Not all producers welcome the reduced testing protocol.

Takenori Suzuki, who raises 60 or so head of cattle in Otama village, said: “Farmers here have been very careful about safety and providing reassurance to consumers. I for one am confident that the beef from my cattle is delicious.”

Suzuki, 37, had no issue with the reduced testing, stating that none of his cattle had recorded excessive radiation levels for a number of years now. Moreover, prefectural government officials visit his ranch once a year to test the feed for radioactive materials. Not a single instance has been found in recent years.

The 64-year-old rancher noted that almost no decontamination has been conducted in mountainous areas.

“This leaves open the possibility that cattle raised in ranches near mountains could be found with radiation in excess of government standards,” he said.

A survey of about 2,600 consumers mainly in the Tokyo metropolitan area last October by the Fukushima prefectural government found that 45.9 percent of respondents said they hoped for a continuation of the current practice of testing all head of cattle for radiation.

In the end, Hasegawa had no choice but to accept the prefectural government decision.

But he still has misgivings.

“Immediately after the nuclear accident, companies suspended transactions," he said. "I wonder how consumers will react to the latest move. Such worries are a constant issue.”

Fukushima rice farmers are also divided in their opinions.

Masami Suzuki grows rice in Yamatsuri and said he would continue with testing if a buyer asked for it even though he reckoned that 10 years or so was sufficient time to detect if there was a problem.

“Continuing to test all rice could rebound and create a negative image,” said Suzuki, 62.

But Toshihiro Ito, 44, a rice farmer in Koriyama, said he was still worried, especially since the measure is being taken when Fukushima rice prices have finally returned to levels before the nuclear accident.

“While the move may be unavoidable, I want the prefectural government to thoroughly explain in a manner that will not stir up the concerns of consumers,” Ito said.

In a survey by the Consumer Affairs Agency in February, 10.7 percent of consumers said they were reluctant to purchase Fukushima rice due to concerns about radioactive materials. While that marked a decrease from the high of 19.6 percent recorded in August 2014, it showed a still persistent reluctance toward Fukushima rice.

Retailers that deal directly with consumers are also keenly sensitive about how the public will react given the underlying importance of maintaining trust with customers.

“There is the possibility of negative publicity again appearing if testing is ended,” said a representative of leading supermarket chain Aeon Co., which is holding in-house discussions about how to handle such rice at company outlets.

While the average price of Fukushima rice has recovered to a large extent, that is mainly due to the fact that much of it is for commercial use rather than personal consumption. Rice for commercial use sold to restaurants or companies that produce bento box lunches can in most cases be simply labeled as “domestic.”

Given that Fukushima rice has always had a reputation for being tasty, it comes as no surprise that commercial users are happy to buy up the rice.

That accounts for the increase in sales of Fukushima rice for commercial use in comparison to before the nuclear accident.

But not all farm products have seen prices return to pre-disaster levels. A noticeable exception is peaches for which Fukushima has long been famous.

With other produce struggling, the Fukushima prefectural government has turned to outside evaluation programs to certify the safety and quality of Fukushima produce.

The prefectural government has set a target of obtaining the largest number of GAP (good agricultural practices) certifications in Japan.

Since fiscal 2017, the prefectural government has begun a program to subsidize all costs associated with applying for GAP certification. It has also established its own certification, called FGAP. Because the program serves as a readily understood indicator for food safety, 27 approvals have already been received in Fukushima for GAP certification.

The prefectural government has also taken extra efforts to ensure that Fukushima sake labels win gold awards given out annually by the National Research Institute of Brewing as well as the most rice brands receiving the highest taste ranking.

“Rather than having the prefecture say the food is safe, having a third party say the food is ‘delicious’ is the best evidence for making such a claim,” said a prefectural government official in charge of distribution of farm produce.

Random radiation testing was also the norm for other farm produce immediately after the nuclear accident.

Shipments to markets were stopped when some vegetables, such as spinach and broccoli, were found to have radiation exceeding safety standards. But most shipment restrictions were lifted within a year of 3/11.

However, other produce more prone to radiation contamination such as mushrooms, wild mountain plants and freshwater fish are still subject to various restrictions because they are harvested in forested areas where there has been little decontamination work, meaning high levels of radiation may remain.

As for seafood, while at one time shipment restrictions were in place for 43 kinds of fish, those were all lifted in February. But fishermen are continuing with only trial operations, limiting the number of days they go out to sea. No decision has yet been made on when normal operations will return.

That is why Fukushima fishermen were outraged by a recommendation by an experts’ panel of the economy ministry to release contaminated water now stored on the grounds of the Fukushima No. 1 nuclear plant into the ocean. Fishermen fear dumping the water into the sea will further inflame negative sentiment about Fukushima seafood.

In the nine years since the Fukushima nuclear accident, the number of nations and regions that still restrict imports of Japanese food products because of the radioactive fallout has dropped to 20 from a high of 54.

In the view of Ryota Koyama, a professor of agricultural economics at Fukushima University, continuing low prices for some Fukushima produce is now more the result of changes in the market structure rather than only negative publicity.

“The authorities need to develop a strategy to regain Fukushima produce’s position in the market,” he said.

Koyama pointed to a program set up in Yamagata Prefecture to only certify rice as a “Tsuyahime” brand if it was grown according to strict quality control standards.

“Unless rice is produced in a manner that results in scientifically delicious rice, it will not win in competition,” he said.

Koyama called the central government's position on releasing contaminated water into the ocean as being “the worst decision possible in terms of Fukushima reconstruction.”

(This article was written by Masahito Iinuma, Morikazu Kogen and Shinichi Sekine.)