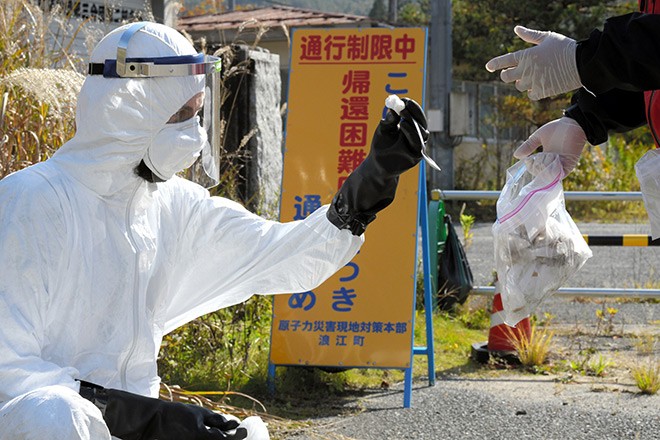 FUKUSHIMA--Typhoons that battered Japan in October reduced radiation levels of some parts of Fukushima Prefecture significantly, but might have created radiation hot spots, according to the environmental group Greenpeace.

Greenpeace Japan, a Tokyo-based nongovernmental organization, on March 9 released the full results of a radiation level survey it conducted at seven locations in the prefecture in autumn 2019, including Namie and Fukushima city.

Radiation levels fell sharply at some of the measurement points due to heavy rain brought by typhoons that made landfall in October and caused extensive damage to the prefecture, the survey showed.

The typhoons also created hot spots, where high levels of radiation are concentrated, in other points, the results indicated.

The organization has conducted surveys on radiation levels in the prefecture since immediately after the triple meltdown at the Fukushima No. 1 nuclear power plant, set off by the earthquake and tsunami disaster on March 11, 2011.

The latest survey was carried out between Oct. 16 and Nov. 5. Typhoon No. 19 struck the prefecture right before Greenpeace started conducting the survey and Typhoon No. 21 hit there while the team was measuring radiation levels.

The team measured radiation levels at a residential area in Shimotsushima in Namie by dividing the area into nine zones with 200 to 900 measurement points in each.

Greenpeace has been measuring radiation levels of the area, which spans about 790 tsubo (One tsubo is about 3.3 square meters) and is located within a “difficult-to-return zone,” since 2017.

A maximum radiation level of 5.9 microsieverts per hour was recorded at 1 meter above the surface of a road near a rice field in the 2018 survey, but the level fell by about 65 percent to 2.1 microsieverts in the latest survey.

The overall average radiation level in Shimotsushima also fell from 1.3 microsieverts in the previous survey to 0.9 microsievert this time.

However, the latest survey also found 40 hot spots with radiation of 1 microsievert or more. The level is about four times the government’s standard for decontamination of 0.23 microsievert per hour.

A maximum radiation of 3 microsieverts was recorded in a depression in the ground that could easily hold a pool of rainwater at 1 meter above the surface.

A reading at the same spot showed a maximum radiation level of 14 microsieverts at 10 centimeters above the ground surface.

Areas around JR Fukushima Station and Fukushima Prefecture’s Azuma Baseball Stadium, one of the venues for the 2020 Tokyo Olympics in Fukushima city, had a low radiation level of 0.1 microsievert on average.

But a maximum radiation of 5.5 microsieverts was recorded near the ground surface in areas close to the city center's main street.

“Some points saw a significant drop that can’t be explained by the decrease in radiation levels with time,” a survey team member said, adding that hot spots “were created in areas rainwater flows into.”

The latest survey also found a point with a high radiation level of maximum 71 microsieverts per hour on the ground surface near the J-Village sporting complex, which straddles Naraha and Hirono. Tokyo Electric Power Co., operator of the stricken nuclear plant, later carried out decontamination work there.

That figure made headlines in December when it was cited, stirring concerns over safety as the area is where the Olympic torch relay will begin.

“It is vital to constantly monitor (radiation levels) and carry out decontamination work,” said Greenpeace member Kazue Suzuki, who was on the survey team.