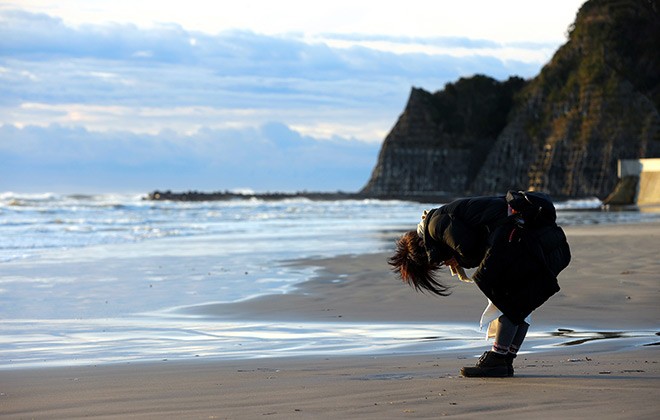 Mariko Odawara, 50, from Sapporo, offers a prayer for victims on a beach in Iwaki, Fukushima Prefecture, early on March 11. Odawara, who visits Fukushima Prefecture every year to do volunteer work, said, “I wish those who are missing could return to their families.” (Hikaru Uchida)

The Pacific coast of the Tohoku region was bathed in warm sunshine on the morning of March 11, the ninth anniversary of the Great East Japan Earthquake and tsunami that ravaged this part of northeastern Japan in 2011 claiming close to 20,000 lives.

Many official ceremonies by the central and local governments were called off this year due to the spread of the new coronavirus.

But that did not stop people gathering at the disaster sites to remember their loved ones. Nine years on, few traces remain of the disaster that also triggered a triple meltdown at the Fukushima No. 1 nuclear power plant in Fukushima Prefecture.

Yoshio Sasaya, 73, lost his six family members, including two sons, Shuichi, 20, and Yoji, 19. They were in the Gamo district of Sendai’s Miyagino Ward when towering tsunami hit and engulfed the district.

Sasaya visited the district and clasped his hands in prayer at 9:20 a.m. in front of a statue of Kannon, a Buddhist deity of mercy, that he himself had erected in their memory.

“I prayed thinking of all victims who perished in the disaster,” he said.

Sendai, like other municipalities, called off a planned memorial service because of the coronavirus scare.

“I think I was able to commemorate the victims in a way that gives me a measure of peace within myself,” Sasaya said.

STATUE OF MOTHER AND CHILD

An unveiling ceremony of a statue of a mother and child was held at the Ohirayama cemetery overlooking the ocean in Namie, Fukushima Prefecture, to commemorate victims.

An inscription at the base of the 2.4-meter-high bronze statue reads: “Praying for the day when flowers bloom in the hearts of residents of Namie who shouldered such deep grief.”

Yoshimi Yoshizaki, 72, who came from Minami-Soma, another severely affected area in the prefecture, noted that March 11 is "an important day for every town resident.”

Nine years on, searches still continue for those still listed as missing.

At 10:30 a.m., about 30 people, members of the Miyako Police Station and coast guard officials, gathered on the coast of Yamada, Iwate Prefecture, and offered silent prayers.

They then went about digging in on the beach and overturning stones in search of clues to people who are believed to have been swept out to sea.