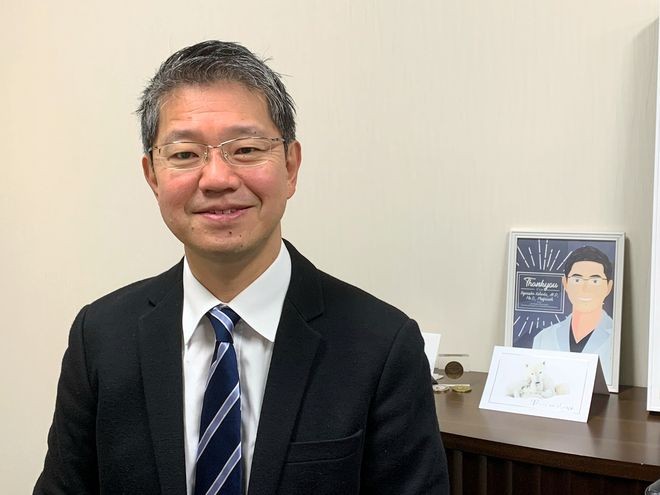 Ryosuke Kuroda, a professor at the Department of Orthopaedic Surgery of Kobe University’s School of Medicine, poses for a photo at the campus. (Kazuya Goto)

KOBE--Scientists at Kobe University are nearing the conclusion of a long research project in regenerative medicine to treat severely broken legs, using cells collected from the patients’ blood.

The scientists are looking to apply for approval of the new treatment by the end of 2021.

To better treat pseudoarthrosis, or intractable fractures, a team of researchers at the university began a study to connect broken bones with cells sampled from blood that build inner walls of blood vessels.

Injecting that type cell derived from humans into animals resulted in the formation of not only blood vessels but also bone tissue.

Based on the finding, a clinical trial began in 2009 targeting seven patients whose shanks or thighs were severely broken.

The team found that the subjects’ bones mended faster than other pseudoarthrosis patients, when cells collected from the surveyed individuals’ blood were injected into their bodies to coincide with surgery to immobilize broken parts with metal fittings.

Broken bones normally mend spontaneously if they are set firmly.

A finger fracture typically requires three weeks for healing, while one can recover from broken legs in six to eight weeks.

However, pseudoarthrosis, or non-union fractures, which patients suffer when exposed to heavy shocks by being involved in car and motorcycle accidents or falling from great heights, takes much longer to heal.

Accounting for approximately 5 percent of all bone fracture cases, individuals suffering from pseudoarthrosis have to undergo surgery on many occasions for two to three years, with some eventually having to use wheelchairs.

“Young and middle-aged people suffer from the condition more often, exerting a great impact on their future lives,” said Ryosuke Kuroda, an orthopedics professor at the Department of Orthopaedic Surgery of the university’s School of Medicine.

Another round of clinical trials started in 2016 to cover five medical centers across Japan, examining 15 patients with broken shanks and 10 individuals with thigh fractures to test the effectiveness of the method.

The team is also considering adopting the pseudoarthrosis therapy for treating ordinary fractures more promptly in the future, especially for elderly patients.

The treatment offers hope for the elderly since the bones of aged people easily break and are difficult to mend, sometimes forcing them to remain in bed.

An objective of the method that is being tested is keeping such elderly individuals ambulatory to improve their lifestyles.