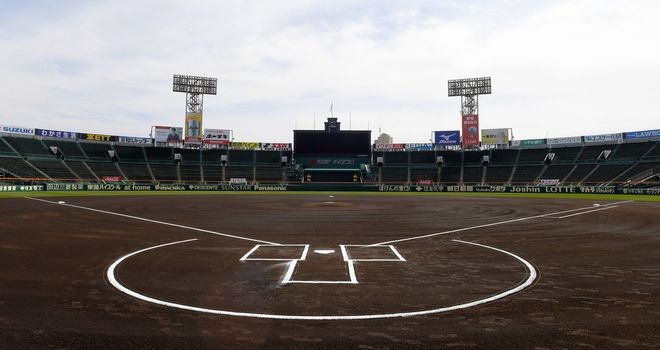 The Hanshin Koshien Stadium would have hosted the spring invitational high school baseball tournament, which was cancelled on March 11. (Asahi Shimbun file photo)

OSAKA--Tears filled the eyes of Etsuo and Hatsue Fujisaka, owners of the Dairiki Shokudo restaurant in Nishinomiya, Hyogo Prefecture, after they heard the latest developments in the novel coronavirus crisis.

They had been prepared for drastic changes to the National High School Baseball Invitational Tournament played at nearby Hanshin Koshien Stadium. But they didn’t expect the entire spring event to be canceled.

“This has never happened (to us) before,” Etsuo said. “I really feel sorry for the players because high school baseball is a once-in-a-lifetime experience.”

The cancellation of the spring tournament, often called “senbatsu” (spring Koshien), is expected to result in billions of yen in economic losses.

Businesses in the area expressed extreme sadness but mainly for the players who lost an opportunity to play on the national stage.

There had been talk about holding games with no fans in the stands. However, with novel coronavirus infections continuing to spread, organizers on March 11 called off the tournament.

The last time senbatsu was canceled was in 1946, when the country was trying to recover from the ruins of World War II.

The spring tournament and its even more popular summer version, also played at Koshien, have consistently drawn hundreds of thousands of baseball fans to the area.

But the reach of the popular tournaments goes well beyond the Kansai region.

Major league scouts are known to attend the games, underscoring the level of talent of the players.

Cheering squads in the stands continue their chants until the final out. And scenes are repeatedly shown on TV of victorious teams celebrating and defeated players sobbing as they scoop up dirt from the field as mementos of their Koshien experience.

At Dairiki Shokudo restaurant, a regular resting spot for fans who trek to the stadium for the games, Hatsue wondered if the drastic move to cancel the tournament was really necessary.

“During the high school baseball tournaments, regular customers visit us from around Japan,” she said. “I will feel very lonely, but the players must be even more frustrated.”

The tournament was to have involved 32 teams from across Japan.

One of them, the traditionally strong Oita prefectural commercial senior high school, had booked rooms at the Fushioukaku Hot Springs Hotel in Ikeda, Osaka Prefecture, for the tournament.

According to Atsushi Okamoto, 62, the president of the hotel, cancellations have been prevalent since February because of the coronavirus outbreak, and he said the economic loss to the hotel was already about 60 million yen ($577,000).

But he felt more sympathy for the ballplayers who now will not show up.

“Even more than sales, it was always an enjoyable experience to welcome high school baseball players here,” Okamoto said. “I feel truly sorry when I think about the players who will not be able to compete.”

During the tournaments, fans across Japan generally cheer for teams from their prefectures, hometowns and even alma maters.

The tradition among staff at the APA Group’s four hotels in Osaka city has been to cheer for the teams that are staying at their facilities.

Four high school teams had planned to stay at those hotels.

At the APA Hotel Osaka Higobashi-Ekimae facility, staff had taken extra precautions against the coronavirus, such as disinfecting and ventilating the rooms and floors where the players would have stayed.

“We had made preparations on the assumption the games would be played without fans in the stands, but I guess the latest decision cannot be helped,” hotel manager Masashi Wakamiya, 42, said.

His sympathies were also directed toward the high schoolers.

“I hope the players will do their best so they can appear in the summer tournament,” Wakamiya said. “We will wait for them so that we can provide all the support they will need.”

The spring tournament normally attracts about half a million fans to Nishinomiya, and there is no doubt that the cancellation will hit the local economy.

Katsuhiro Miyamoto, 75, professor emeritus of theoretical economics at Kansai University, said the economic loss from the cancellation would be about 2.897 billion yen ($28 million).

“The spring and summer Koshien tournaments have the largest economic effect among sports involving students,” he said. “The cancellation will also likely influence decisions on whether to hold other large events.”

His calculation for the economic loss was based on admission fees as well as the expenses paid by fans for lodging, food, drinks and souvenirs.
Miyamoto himself is a huge high school baseball fan.

“Because the decision was based on a risk assessment, there is nothing that can be done about it,” he said. “But it is extremely regrettable that players will lose what may be a once-in-a-lifetime chance.”

(This article was written by Mizuho Morioka, Hibiki Yamashiro and Kenji Tsuji.)