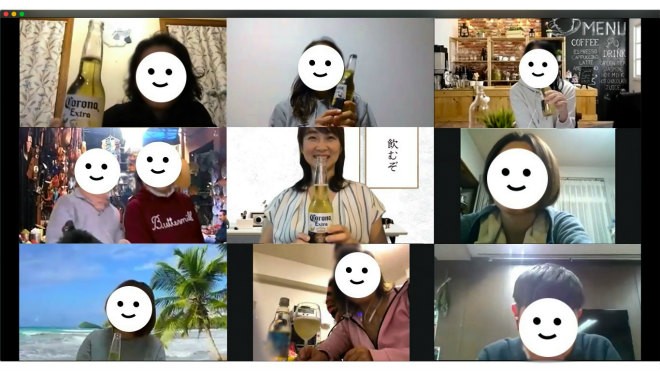 People attend a drinking party through an online service on March 6. Faces of those other than Ayumi Nonaka are hidden to protect guests' privacy. (Provided by Ayumi Nonaka)

Drinkers desperate for somewhere to unwind in this time of social distancing due to the coronavirus pandemic are using video chat apps to hold parties online.

Brewers, noting the trend, are hopping on the bandwagon and hosting online parties of their own.

Corona beer was the beverage of choice for many imbibers at an online party held one Friday night in early March by Ayumi Nonaka, 42.

The website designer's eight guests toasted one another via the screens of their PCs and smartphones, from the comfort of home or co-working spaces.

The guests were all connected using Zoom, a business meeting video app which lets users view multiple live video feeds on one screen and switch away to chat one on one.

Many were women in their 40s who live in and around Zushi, Kanagawa Prefecture, and are regulars at dinners and other events that Nonaka organizes now that her child has grown up and she has free time on her hands.

Going through the comments on her events site, Nonaka hit upon the idea of throwing an online coronavirus drinking party so people could vent about coping with the new normal under the threat of the deadly virus.

Many posts were from people complaining of cabin fever from having to work at home.

One woman said she had “not left home for three weeks since switching to remote work” due to the pandemic.

“My child and I are getting fatter because we rarely venture out since schools were suspended,” another told Nonaka.

Another woman posted about being lucky enough to pick up a few rolls of toilet paper since panic buying spawned nationwide shortages.

She worried that other shoppers might mistake her “for someone buying toilet paper to resell online.”

Nonaka set up the party on Zoom and announced the event on social networking sites so anyone could join.

A Tokyo single mother who attended Nonaka's party stumbled across it online.

”I took advantage of the opportunity to try out Zoom,” she said. ”My boss told me to download it for remote work as I hadn't used it before.”

The woman said she was glad of the chance to meet other mothers close in age and in a similar situation.

Unlike regular drinking sessions, online parties offer the chance to slip away from someone's unwanted attention.

“Where you sit is important at real parties,” one participant noted. “When I'm stuck next to someone I don't like, I feel depressed as I have to endure the guy for two hours. But that will never happen at an online party.”

Other attendees appreciated not having to "refill others’ glasses,” “portion out servings of meals into smaller dishes,” or “take orders for other participants.”

One was pleased that it is “easier to reach the bathroom.”

By the time the party wrapped at 11 p.m. with everyone promising to hold another, 12 guests had come and gone.

Hostess Nonaka had downed three bottles of Corona and a bottle of lemon beer, on top of some fried chicken, cheese and a ham salad, which came to a bill of 2,000 yen ($19.20).

Alcoholic beverage makers are holding online shindigs as well to connect the public with their products.

The Kintora Co. brewery in Nagoya’s Kita Ward, a family-run business for seven generations established in 1845, held one this spring to unveil its ume liqueur and unrefined sake beverage Pinky Tiggy.

But Kintora abandoned the event, which included a DJ performance and an emcee, due to the coronavirus outbreak.

About 30 people who had tickets that came with the new product took part in Kintora's substitute online event that started at 7 p.m. on March 14.

After having a toast through a live video feed on their devices, guests chatted as Yoshifumi Mizuno, 43, a senior managing director at Kintora, introduced the brewery with images shot on an iPhone.

“Since it's hard to go about daily life as usual right now, we need to offer people a different means of entertainment,” Mizuno said.

“Our brewery is small, so instead of running ads we've been winning over new customers by having them sample our products. I expect online solutions to enable us to reach out to consumers we couldn't come across in the past.”