EDITORIAL: Resilience of Japan’s economy at stake as virus takes its toll 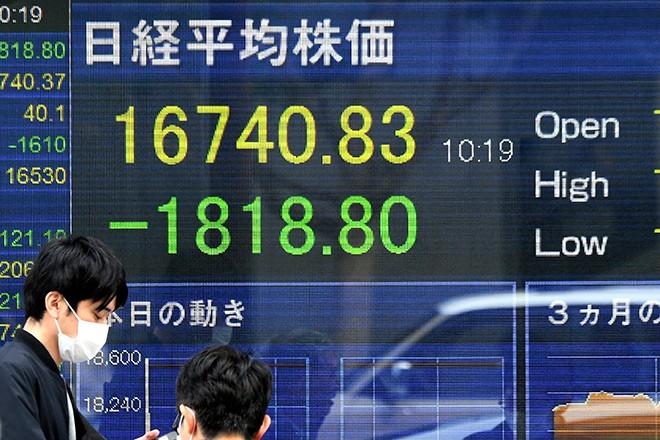 The benchmark Nikkei 225 index of the Tokyo Stock Exchange temporarily falls below 17,000 in the morning trading on March 13. (The Asahi Shimbun)

Global stock markets have plunged in tandem with the spread of the new coronavirus.

The government and the Bank of Japan need to put measures in place to prevent the rout from battering the nation’s economy, which would have dire consequences for employment and people’s daily lives.

In the Tokyo market, the benchmark Nikkei 225 index nosedived on March 13, closing 1,128 points lower than on the previous day. Japanese and U.S. stock markets have fallen by about 30 percent over the past month.

COVID-19 has been declared to be a pandemic, and the number of patients has continued to climb. Countries are increasingly imposing strict travel restrictions and other measures in response to the spread of the deadly virus.

The crisis is choking the cross-border flow of people and goods, the driving force of recent global economic growth. The world has tumbled into turmoil, with no end in sight.

Uncertainty about the future of the global economy is making investors uneasy.

Policy efforts should be focused on preventing an explosive spread of coronavirus infection at home. The economy will start to recover when people begin to see light at the end of the tunnel.

To pave the way for the crisis to begin to recede, it is vital to prevent a single sucker punch in one particular sector from pushing the entire economy into a downward spiral and weakening the resilience of society as a whole.

The strategy should be designed to achieve two objectives: curbing the spread of the virus and keeping the wheels of the economy spinning.

The European Central Bank, in a recent meeting of its Governing Council, decided to expand its bond-buying program to push down interest rates, while the U.S. Federal Reserve slashed key interest rates and started injecting money directly into markets.

After many years of aggressive monetary expansion, few effective items are left in the BOJ’s toolbox. But it should make the best of the remaining tools to deal with the changing situation while supplying appropriate amounts of cash into markets.

Fiscal policy also has an important role to play in efforts to limit the damage to employment and income. The government needs to ramp up aid to workers and industries directly affected by the global economic tumult.

If the prospect of a huge shortage in demand looms large on the economic horizon, the government will need to consider pumping up spending and cutting taxes.

Some sectors are already suffering sharp declines in sales: for example, tourism, department stores and the transport industry.

Even before it was pummeled by repercussions from the coronavirus outbreak, the Japanese economy was showing increasing signs of weakness amid falling exports due to the U.S.-China trade friction and shrinking domestic demand triggered by the rise in the consumption tax rate.

Compounding the situation are strains the epidemic is imposing on the supply side of the economy. Disruptions in international supply chains are forcing manufacturers to cut back on production while events are being canceled and commercial facilities are suspending operations. What is happening is not a simple economic downturn.

The government needs to figure out an effective fiscal cure to help the economy recover from this complicated ailment without sinking into deep recession.

It has to cobble together a package of powerful but cost-effective measures to compensate for income losses and shore up consumer spending.

Japanese society is facing a severe test of its resiliency and its ability to maintain its economic health while fighting the virus.