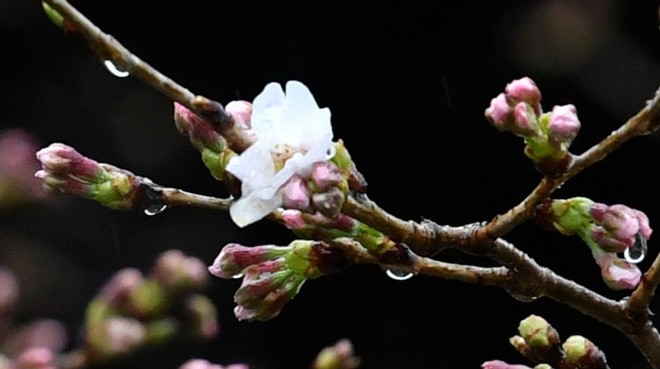 Cherry blossoms began blooming in the Tokyo area on March 14, the earliest date since record-keeping began in 1953.

The announcement was based on cherry blossoms at Yasukuni Shrine in the capital’s Chiyoda Ward.

At 2 p.m., officials of the regional headquarters counted the five to six flowers that had opened, breaching the benchmark figure used to announce the news.

Ironically, the weather in central Tokyo on March 14 was not typical for “hanami” cherry blossom viewing as sleet fell mixed with rain. The temperature at 2 p.m. was just 2.5 degrees.

The Tokyo announcement was the first based on somei-yoshino cherry trees in Japan this year.

Until now, the earliest announcement of the opening up of the cherry blossoms was on March 16 in both 2002 and 2013.

“The flowers began opening up earlier than usual because of not only the record warm winter between December and February, but also because of the higher-than-normal temperatures in March,” said an official with the JMA’s Tokyo Regional Headquarters.

According to a forecast by the Japan Weather Association, cherry blossoms in the Tokyo area are expected to fully bloom on March 23.