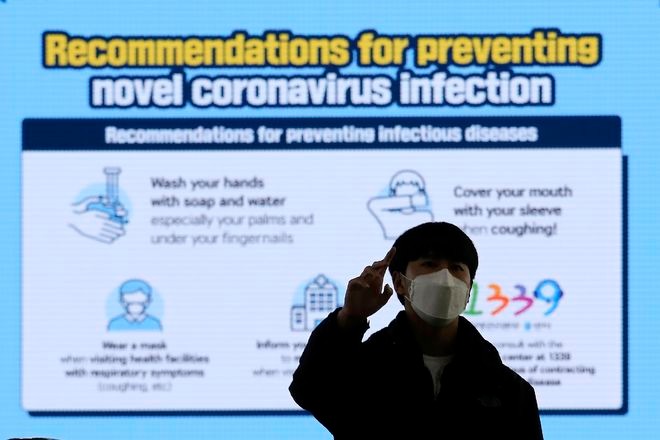 A man wearing a face mask passes by an electric screen about precautions against the COVID-19 at a railway station in Seoul on March 14. (AP Photo)

SEOUL--South Korea on Sunday reported 76 new coronavirus cases and three more deaths, a fall in new cases to double-digits for the first time in over three weeks.

South Korea, which has the highest number of cases in Asia after China, now has a total to 8,162 confirmed infections and 75 deaths, the Korea Centers for Disease Control and Prevention said (KCDC).

South Korea has been experiencing a downward trend in new cases and the latest numbers are significantly lower than the peak of 909 cases reported on Feb. 29 and down from the 107 recorded on Saturday.

Forty-one of the new cases were from the city of Daegu, the epicentre of the country's outbreak.

A total of 120 patients were released from hospitals and for the third day in a row the daily number of those recovered exceeded that of new confirmed cases since South Korea's first case was confirmed on January 20.

Apart from measuring temperature at the airport, visitors from those countries now need to download an app the South Korean government rolled out to report whether they have any symptoms related to the virus everyday.

South Korea has been testing hundreds of thousands of people and tracking potential carriers like detectives, using cell phone and satellite technology.