Bento artist adds Lennon, ‘The Scream’ to her tasty works 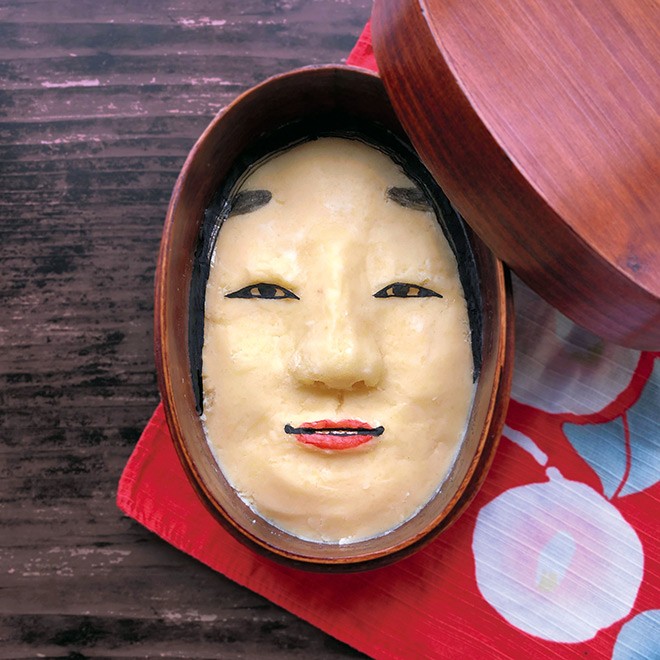 HATSUKAICHI, Hiroshima Prefecture--A museum here is showcasing the ingenious bento box lunches created by an avant-garde artist who even placed a Beatle in the food.

The Woodone Museum of Art on March 14 opened the exhibit featuring 26 photographs of the bento made by Miki Matsuura, a designer who goes by the artist name of nancy.

Among the subjects created on the bento are portraits of celebrities, including John Lennon, as well as copies of famous paintings.

Matsuura, 56, who resides in Higashi-Hiroshima, came up with the idea after making daily bento for her husband and son.

From 2017, after her son started working, she had more time on her hands. She wanted to post fashionable photos on Instagram, and her first bento art creation was a work by Banksy, the anonymous street artist based in Britain.

She used an “umeboshi” pickled plum for the red balloon. And for the silhouette of the young girl, Matsuura painted a mixture of edible coal and water on a thin gelatin film, which melted naturally from the heat of the rice.

She continued to create various bento art, and one that she made in October 2018 of cross-dressing TV personality Matsuko Deluxe gained about 8,000 likes and led to a surge in her follower numbers.

Matsuura went on to create bento featuring portraits of other entertainment figures, such as Hiroiki Ariyoshi, who emcees a number of TV variety shows, and actor Takayuki Yamada.

Other works were reproductions of famed paintings, such as “The Scream” by Edvard Munch and Johannes Vermeer’s “Girl with a Pearl Earring.”

For Valentine’s Day in 2019, Matsuura surprised her husband with a bento featuring a Noh mask.

Her husband rarely commented on her other bento, but when he returned home that day, the first thing he said was, “It was incredibly scary.”

He added that it was so unsettling having the face stare at him that he ate the eye parts first.

Matsuura collaborated with the Yamaguchi Prefectural Art Museum last year when it organized an exhibition of works by Ryusei Kishida (1891-1929).

For a local commercial, Matsuura created a bento inspired by the paintings Kishida made of his daughter, Reiko.

Some of Matsuura’s Instagram fans have described her bento as “avant-garde.” She has started referring to herself as an “avant-garde bento artist.”

But appearance is not her only focus. She said she ensures her bento are also delicious and well-balanced.

“This art is only finalized when there is someone who will eat it,” Matsuura said. “We are a husband-and-wife unit.”

Admission to the exhibition, which runs until May 24, is free.

The museum is taking special precautions against the novel coronavirus outbreak, and as of March 14, it planned to remain open.

However, museum officials said that changes to the exhibition schedule were possible depending on developments in the outbreak.