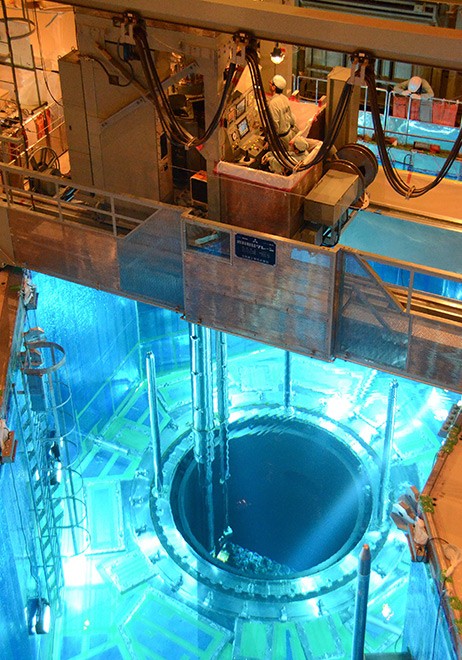 SATSUMA-SENDAI, Kagoshima Prefecture--One of the reactors at the Sendai nuclear plant here was shut down March 16 after the plant's operator failed to meet the deadline to complete an anti-terror facility.

It is the first time a reactor has been halted for this reason in Japan.

The No. 1 reactor, run by Kyushu Electric Power Co., shut down at 9 a.m. after its output was gradually lowered.

The plant's No. 2 reactor is also expected to go offline in May due to delays in constructing the emergency facility.

The anti-terror facilities are designed to allow nuclear plant operators to manage the cooling of reactors and other operations through remote control in an emergency such as terrorists crashing an aircraft into a nuclear complex.

Operators are required to construct the facilities within five years after measures to safeguard their reactors are approved by the Nuclear Regulation Authority, the government's nuclear watchdog.

The requirement for the plants to construct anti-terror facilities is part of the more stringent reactor regulations that went into effect in 2013, following the 2011 Fukushima nuclear disaster.

Reactors that have not completed an anti-terror facility that has cleared nuclear regulations a week before the deadline will be shut down, as mandated by NRA policy.

The deadline for the emergency facility at the Sendai plant's No. 1 reactor was March 17.

The reactor restarted in August 2015, becoming the first in Japan to go back online after the triple meltdowns at the Fukushima No. 1 nuclear power plant set off by the March 11, 2011, Great East Japan Earthquake and tsunami.

Kyushu Electric plans to restart the No. 1 reactor again on Dec. 26 after getting its anti-terror facility certified by the NRA.

Constructing such facilities has taken more time than planned for many operators due to the large scale and high cost involved in the projects.