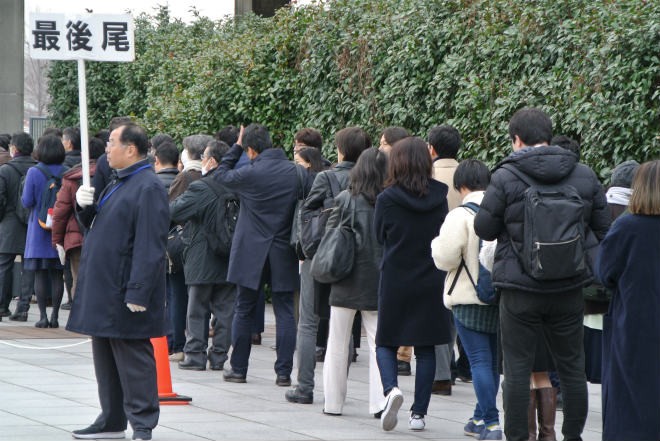 People line up for a chance to win a seat at the Yokohama District Court on March 16 to hear the verdict for Satoshi Uematsu, who was accused of killing or injuring 45 people at a care home for people with disabilities in Kanagawa Prefecture. (Satoru Semba)

The Yokohama District Court on March 16 handed the death sentence to a man accused of killing 19 residents at a care home for people with disabilities in Sagamihara, Kanagawa Prefecture, in 2016.

The focus of the criminal trial has been whether and to what extent Satoshi Uematsu, a former employee at the Tsukui Yamayurien facility, was mentally competent to be held criminally responsible for his actions.

Defense lawyers claimed he was unable to control himself at the time due to the effects of marijuana, which he is said to have constantly used, and an underlying psychiatric disorder.

The ruling rejected the defense case, saying Uematsu was fully competent to take responsibility for his actions. It pointed out that the defendant committed premeditated crimes driven by a solid motive.

It is distressing to think about why this person perpetrated the dreadful mass stabbing, which left 19 people with disabilities dead and 26 others seriously injured, including staff members.

As shocking for Japanese society as the scale and brutality of the crime were his heartless words about disabled people.

We were eager to see the trial shed light on at least some of the factors and background behind his extraordinary crime so that we will get insight into how he came to harbor such distorted thoughts about disabled people.

But the trial disappointed us. The defendant talked about how parents with disabled children looked exhausted to him when he was a child and how his prejudices against people with disabilities grew while working at the facility.

But he never offered sincere and relevant answers to desperate questions posed by the families of victims.

In sharp contrast, the words uttered by the people who lost their loved ones and were profoundly wounded by their losses struck a powerful resonant chord in many.

The mother of one victim, her 19-year-old daughter, whose name was disclosed by her as Miho while most victims were called by pseudonyms during the trial to maintain their anonymity, said, "I was so happy to have my daughter."

The younger sister of another victim, a man who was 55, recounted how he celebrated the birthdays of his family members by pointing to the dates on the calendar.

During the criminal investigation and trial, many people testified that they were able to communicate well with victims despite their speech difficulties. These witnesses recalled their daily casual exchanges with their deceased loved ones and spoke about their memories of trips with them.

The mother of a man who was stabbed in the neck said her son's existence helped her and other people around him mature as persons, in an outright rejection of the defendant's views about physically or mentally challenged people.

These testimonies should be regarded as important messages for not just the defendant but society as a whole.

Everyone has an invaluable life to live and the right to share happiness with their families.

Many Japanese must have realized that despite a socially shared understanding of this fact there is a grim history of discrimination against disabled people and leaving them in a wretched situation as a background to the dreadful crime.

The mother of a 43-year-old man who was killed in the stabbing rampage tried to remind people of the possibility that anyone could become disabled.

"When you grow old you may start having difficulty in conversing due to a decline in your cognitive function. Anyone could become disabled because of an accident or a disease," she said.

The principal question posed by this tragedy is how to build a society where there is no wall of discrimination between people with and without disabilities and where everyone is respected as an individual.

Each and every member of our society needs to confront this challenge.