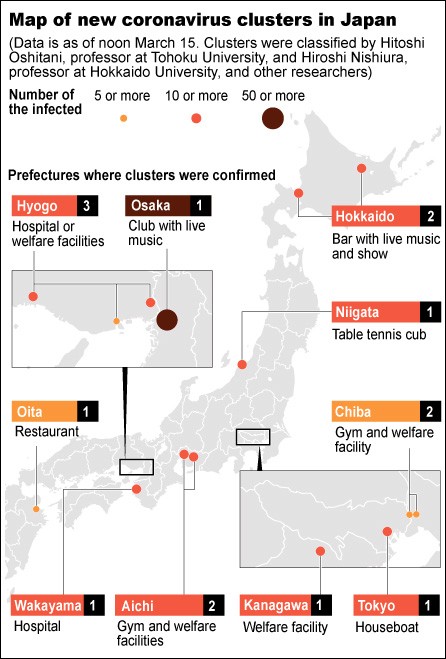 The health ministry released an online map identifying clusters of people infected with the new coronavirus that showed Osaka Prefecture has the largest concentration of cases at more than 50.

The map posted on the ministry's website March 16 identified coronavirus clusters in Tokyo and nine prefectures as of noon March 15.

A cluster infection refers to a group of cases associated with a certain venue.

According to an expert panel advising the government on the health crisis, a cluster infection is likely to occur when a large number of people gathers and talk in close proximity in an enclosed place with poor ventilation.

The map identified a cluster with at least five cases linked with each other. It does not include cases in which the coronavirus was transmitted within a family.

The largest cluster infection was confirmed at a club in Osaka Prefecture where live music is played. More than 50 cases were reported.

Ten clusters with at least 10 confirmed cases of infection in each were identified nationwide.

In Aichi Prefecture, the contagion spread at a facility providing day care for the elderly. One of those infected had made use of a similar facility at another location and ended up transmitting the virus to others.

The contagion expands if a cluster leads to another cluster.

Local governments have focused in recent weeks on preventing an epidemic by identifying those who may have had close contact with infected people and monitoring their health while testing for the coronavirus even if they do not display symptoms.

The prefectural government in Hokkaido requested that all elementary and junior high schools, as well as special needs schools, in its jurisdiction close from Feb. 27, ahead of other local authorities across the nation.

On Feb. 28, the governor of Hokkaido declared a “state of emergency” and called on residents to refrain from going outdoors on weekends.

Experts examining whether such measures are effective in stemming the spread of infection are due to release their findings on or around March 19.

Although the ministry’s map showed a cluster infection associated with a restaurant in Oita Prefecture, the authorities there rejected the assessment and urged the ministry to revise its findings.

“We cannot definitively conclude that the infection spread through the restaurant,” said a prefectural official, citing the results of diagnostic testing that found that all of 42 people who may have been exposed to the virus at the restaurant had tested negative.

The ministry plans to update the map after reviewing the definition of a cluster infection based on feedback from local authorities.

(This article was written by Kohei Tomida and Juria Maeda.)