‘Can you truly call this a news conference?’ Abe, media under fire 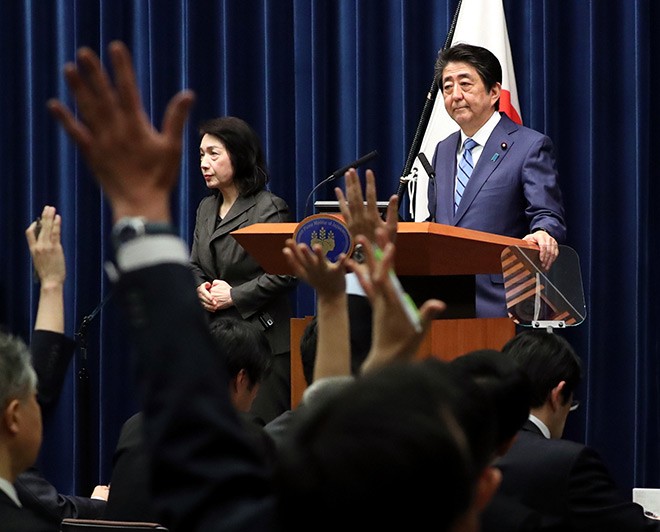 Many reporters could not ask questions to Prime Minister Shinzo Abe at his news conference on March 14 held at the prime minister’s office. (Shogo Koshida)

Journalists blasted Prime Minister Shinzo Abe over his March 14 news conference, but reporters themselves were also criticized for not pressing the prime minister to adequately explain Japan’s anti-coronavirus measures.

The problem, critics say, stems from the rigid system of prepared questions and designated questioners at news conferences held by the prime minister’s office.

The March 14 news conference was the second one held by Abe concerning the new coronavirus that has spread across Japan and become a pandemic.

He held a Feb. 29 news conference after he abruptly asked schools nationwide to shut down as a measure to prevent infections. But he was harshly criticized by opposition parties and the public for not fully explaining the rationale for his decision that affected millions of children, their parents and teachers.

Reporters saw a chance to press Abe for answers on March 14.

Abe opened the news conference by reading prepared text from teleprompters set at the sides of podium for 21 minutes. He then took questions from two reporters from two news organizations that were selected to represent all members of the Cabinet’s press club, and six other reporters.

Many other reporters still had their hands up to question Abe when Eiichi Hasegawa, the Cabinet public relations secretary, signaled an end to the news conference.

One of the reporters did manage to get Abe’s attention, saying: “I still have a question. Mr. prime minister, can you truly call this a news conference?”

Hasegawa decided to call the names of four reporters, including one from The Asahi Shimbun and freelance journalists, to pose questions for the prime minister.

But others wanted to ask their questions, and Abe, saying, “Might as well,” stuck around.

The news conference ended after 52 minutes. The questioning period lasted 31 minutes, about twice the length of the period on Feb. 29.

However, the press room on March 14 still went into uproar when Abe left and went home. Reporters wanted Abe to continue taking questions.

Japan Broadcasting Corp. (NHK) aired the news conference live but ended the broadcast after 40 minutes. The public broadcaster did not show the scene of reporters demanding that Abe hear their questions.

Hasegawa had ended the Feb. 29 news conference with multiple reporters’ hands still raised while Abe returned to his residence.

“There are more questions to be answered,” noted freelance journalist Shoko Egawa shouted with her hand up in the air.

Abe had spent 20 minutes with his opening remarks and accepted questions from five reporters. That question and answer period ended after 16 minutes.

In both the opening remarks and the following Q&A session, Abe did not offer a clear explanation for the basis of his decision to request a shutdown of special needs, elementary, junior high and high schools nationwide.

After the Feb. 29 news conference, Egawa also had harsh words for news organizations belonging to the Cabinet’s press club.

“Reporters didn’t even try pressing Abe to answer those unanswered questions,” she said to The Asahi Shimbun. “They didn’t demand a continuation of the news conference, either. They are not performing the duties of journalists.”

Many people on social media also criticized what they saw was a lack of urgency and desire to seek the truth on the part of reporters at the news conference.

“Abe made it through the news conference without explaining the reason why he decided to close schools,” said Shigeru Nakajima, a lawyer who specializes in risk management and news conferences held by business entities. “It was very distasteful. He made the request (to close schools) and offered nothing else. It feels like an order.”

Nakajima said the government can only exist with the understanding and cooperation of the public.

“Yet, (Abe) thinks people will simply go along with any government decision,” he said.

Masayoshi Takemura, a former politician who served as chief Cabinet secretary under the administration of Morihiro Hosokawa in the mid-1990s, said reporters are like the liasons between the government and the public.

“(The prime minister) should answer questions in the absence of special circumstances, such as Diet sessions,” Takemura said.

According to the Press Office of the prime minister’s office, press club members were notified in advance that both news conferences on the novel coronavirus outbreak would be about 20 minutes.

The press club indeed hosts the prime minister’s news conferences. But as a matter of convention, the Cabinet public relations secretary acts as the emcee.

The news conferences typically open with the prime minister’s remarks, followed by two news organizations asking questions on behalf of the entire press club. The floor is then supposedly open for other questions.

Two to four of these organizations take the role of “kanjisha” to serve as a liaison between the prime minister’s office and the entire press club. The kanjisha change every two months.

When a news conference is scheduled, reporters of the kanjisha draft questions in advance. The questions are revised if other media organizations have ideas.

The kanjisha’s questions are posted in the press room inside the prime minister’s office for other media to see.

According to the Press Office, the chief of the office asks the kanjisha organizations about their prepared questions. If the kanjisha do not or are unwilling to specify the content of questions, the chief goes to the press room, which is open to anybody, and checks the posted questions.

A government official said the process exists so that officials, including Abe, “can prepare ahead of the news conferences to answer questions more properly.”

The “free question time” toward the end of such news conferences is not exactly free.

Press Office officials ask some of the press club’s members what they plan to ask the prime minister.

Some organizations tell the officials, but others don’t. Once the officials know the questions, they draw a list of expected inquiries as well as the planned answers.

At the news conferences, the Cabinet public relations secretary selects reporters by name to let them pose questions.

The March 14 news conference was the first time for The Asahi Shimbun to be called on during the free question time at a news conference held at the prime minister’s office since June 2016.

There have been 14 such news conferences held since August 2016.

NHK has been selected seven times to pose questions, the most among media organizations, followed by The Yomiuri Shimbun, the Nico Nico Douga video-sharing service, and others with four times each.

Egawa said that providing prior notice about the content of questions is not necessarily bad.

“I see a point in doing so if the reporters want officials to answer questions based on certain data. Then they can deepen the discussion by asking further questions,” Egawa said.

“But if the news media that have notified officials about questions in advance are exclusively called to ask questions, and the reporters do not press and ask necessary follow-up questions, then the news conference will become just a show of the cozy relationship, a show of nothing except reading the anticipated questions and prepared answers.”

Under the existing conditions, reporters are not prohibited from asking follow-up questions or repeating an inquiry. But the emcee often says, “Next,” depriving the reporter and the public from receiving additional information.

After the March 14 news conference, Egawa applauded reporters’ efforts to seek a continuation.

“Abe also took time to answer more questions. It was the first step toward improvement for both reporters and Abe,” she said.

Egawa emphasized that reporters must keep pressing Abe on issues that are of interest to the public. She also proposed that the press club take over the role of emcee at the news conferences.

(This article was written by Natsuki Edogawa, Makoto Tsuchiya and Keiko Sato.)