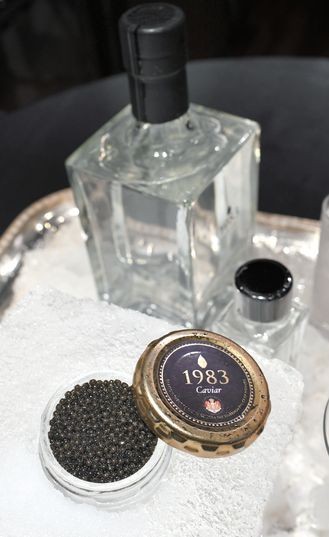 Japan-made caviar with a warrant from the Monaco royal family and vodka produced by Miyazaki-based Japan Caviar Inc. (Hiroyuki Kikuchi)

MIYAZAKI--Japan-made caviar is delighting the taste buds of the Monaco royal family, earning it a prestigious royal warrant.

The milestone will help Japan Caviar Inc., which produces and sells Japan-made caviar, boost its recognition and expand exports to overseas markets.

The Miyazaki-based company was approached by a Japanese restaurant in Monaco, a royal warrant holder in the Mediterranean principality, to provide Japan-made caviar. The company collaborated with a royal chef to develop the luxury product, which sells for 20,000 yen ($188) per 20 grams, excluding tax.

Japan Caviar has also released a special vodka that it says goes well with caviar. The beverage, which is based on a shochu spirit, is available in a 750-cc bottle for 5,000 yen.