State funds to be juggled to cover cleanup costs from Fukushima 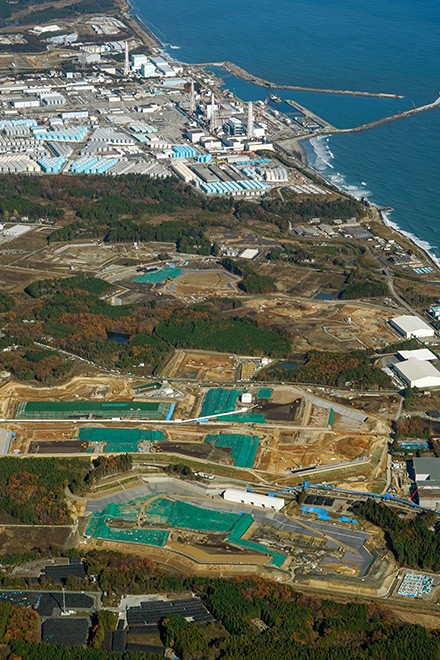 Interim storage facilities for radioactive waste from the Fukushima No. 1 nuclear disaster are shown in the foreground in Okuma, Fukushima Prefecture. Seen in the background is the nuclear complex. (Asahi Shimbun file photo)

The government has moved to revise a law to allow for the diversion of budgetary funds set aside for the promotion of renewable energy to help cover ballooning costs related to the storage of radioactive waste produced during cleanup work after the Fukushima nuclear disaster.

Tax revenues appropriated for renewable-related projects are not permitted to be used for nuclear power programs under the special account law, which governs budgets allocated for specific purposes.

Earlier this month, however, the government submitted a bill to the Diet to revise the law to make the diversion of funds legal. It plans to enact the legislation during the current Diet session and put the revised law into force in April 2021.

This would be the first time for a revenue source earmarked for a specific expenditure to be diverted to a different purpose.

But the revision bill is likely to draw criticism from the public as it concerns the divisive issue of nuclear power and raises further questions about the government’ longstanding insistence that nuclear power is an inexpensive energy source.

These expenditures are grouped into more categories, such as one for nuclear energy and another for renewable energy sources.

About 300 billion yen ($2.78 billion) a year is allocated for programs associated with nuclear energy, including grants to local governments hosting nuclear power plants, while 800 billion yen or so is set aside to promote renewable energy, energy saving efforts and ensuring a stable energy supply.

They are project-specific tax revenues, meaning they cannot be used for other purposes. The amount of those budgets remains at similar levels each year.

The government's move was prompted by runaway costs to process a vast volume of contaminated waste due to the 2011 disaster at the Fukushima No. 1 nuclear plant and maintain them in interim storage facilities in Fukushima Prefecture.

The government decided to shoulder some of the costs to help Tokyo Electric Power Co, operator of the stricken plant, and gained Cabinet approval to do so in December 2013.

Since fiscal 2014, it has set aside about 35 billion yen annually for the interim storage facilities. The funds come from revenues earmarked for nuclear energy-related projects in the special account.

But expenditures concerning the storage facilities are running a lot higher than initially envisaged.

An estimate released in late 2016 by the Ministry of Trade, Economy and Industry showed that the project will eventually cost 1.6 trillion yen, compared with an initial projection of 1.1 trillion yen.

The government has allocated an additional 12 billion yen annually for the storage facility project since fiscal 2017.

The revision bill has a clause stipulating that funds diverted to nuclear energy-related programs must eventually be returned to renewable energy project-specific tax revenues.

But it remains unclear if the clause will ease objections from opponents of nuclear energy, even if the fund diversion is a temporary measure.

Yoshikazu Miki, former president of Aoyama Gakuin University and a specialist of the tax system in Japan, called on the government to justify its proposed fund diversion by providing a full explanation of the issue.

“A special account budget has rarely been scrutinized during Diet debate, unlike the general account,” Miki said. “The revision bill requires special attention as it is related to a nuclear power plant. Some members of the public may raise objections to the revision. The government needs to explain the matter to taxpayers to defend its need to act in this way.”

(This article was written by Tsuneo Sasaki and Hiroki Ito.)