Memorial to dead wartime B-29 crew in Tokyo consoles souls 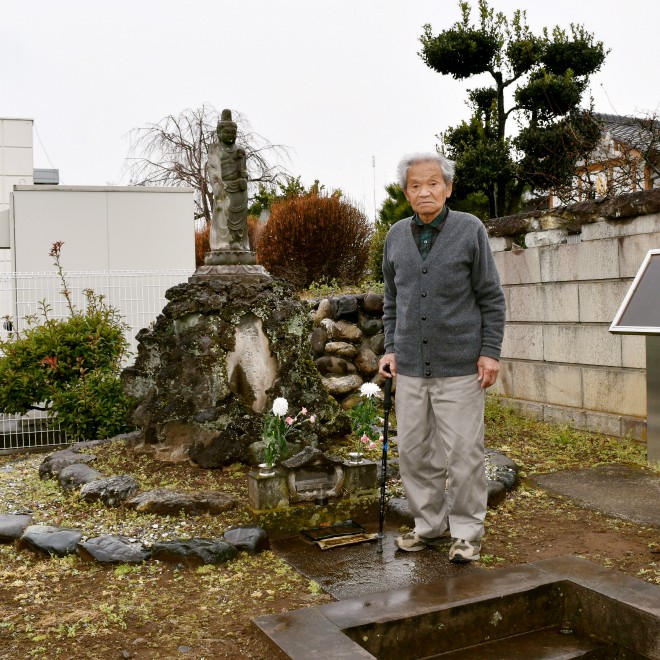 Gontaro Omata on March 8 poses in front of the Heiwa Kannon statue set up on the site of a B-29 bomber crash in the Akitsucho 1-chome district of Higashi-Murayama in western Tokyo. (Kengo Maeda)

Residents of a western Tokyo city applauded when seeing a U.S. B-29 bomber engulfed in flames in the air near the end of World War II.

After the aircraft crashed, however, they recovered the remains of the crew and set up a Buddhist statue to console their souls based on the thought that even enemies should be treated fairly following their deaths.

The memorial, which stands 1 meter tall along a street in the Akitsucho 1-chome district of the capital’s Higashi-Murayama, has its name, "Heiwa Kannon" (Peace Kannon), engraved on the front.

At 3:15 a.m. on April 2, 1945, a B-29 bomber was part of a bombing attack on and around a Nakajima Aircraft plant near Higashi-Murayama, where fighter aircraft engines were produced.

Gonjiro’s eldest son, Gontaro, now 93, heard of the details of the incident from Gonjiro and his siblings following the end of World War II, as Gontaro was in Chiba Prefecture as a volunteer soldier around that time.

According to the accounts of the witnesses, the U.S. bomber caught fire and then circled above Higashi-Murayama for some time.

At the sight of that, residents initially “expressed joy by clapping” since the Allied forces were considered as “Kichiku Bei-Ei” (American and British devils) during the war.

The B-29 finally went down with a thunderous roar, making a huge hole 40 meters in diameter and 20 meters in depth in the tea field.

Amid a burnt odor, Gonjiro, his family and neighbors started collecting the remains in a straw bag so they could be buried in the public cemetery of the local community. The crashed aircraft was sent to the Higashi-Murayama town office.

Shortly after the war ended, personnel connected to the U.S. military visited the home of Gonjiro to ask about the B-29. After hearing about the details of the crash and where the crew was buried, the personnel reportedly picked up their remains at the cemetery.

Following that, Gonjiro, a devout Buddhism worshipper, who would tell Gontaro and others that “the discrimination between friend and foe means nothing after death,” was seeking a way to honor the war dead.

Determined to “install a Kannon statue to pray for their spirits,” Gonjiro asked an acquaintance to make the figure, paying for the work out of his own pocket.

The statue was erected in November 1960 on the crash site.

A senior official from the U.S. Air Force in Japan was in attendance at the completion ceremony, but Gonjiro was not there because he had passed away in July just before the installation.

Even after the completion of the Kannon, the names and other details of the crew members were unknown.

For that reason, Gonjiro’s second son visited the United States on many occasions to locate their bereaved families as Gonjiro hoped to share how their beloved ones died “with the relatives.”

The families of all the 11 crew members were found by November 1978, resulting in visits by some relatives of the victims.

A copper plate showing the names of the entire crew was erected by the statue in April 2014, and a relative of one of the deceased air crew participated in the completion event.

When the crew members’ personal possessions were returned to the bereaved families, the U.S. military sent a letter of appreciation.

The copper plate also bears the words of Gonjiro: “May the spirits of fallen heroes rest in peace in prayer for permanent peace.”