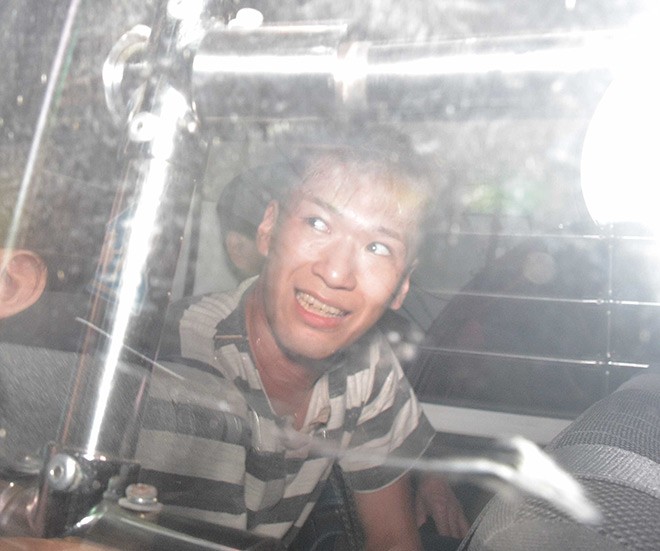 Satoshi Uematsu is sent to prosecutors on July 27, 2016, the day after his arrest in Sagamihara’s Midori Ward in Kanagawa Prefecture. (Asahi Shinbun file photo)

The March 16 court verdict in the Tsukui Yamayuri-en mass murder case made me reread novelist Kenzaburo Oe's works, many of which feature anguished protagonists whose children have disabilities.

The 1967 full-length novel "Man'en Gannen no Futtoboru" (The Silent Cry) contains a scene where the protagonist observes his son with cold, clinical eyes: "Like a hydroponic plant in murky water, he lies with his expressionless eyes open, just existing quietly."

The son asks for nothing and never expresses his feelings, which causes the father to "doubt at times if he is really alive."

Oe's own son, Hikaru, who has autism, was born developmentally disabled in 1963.

The following year, Oe published a short story titled "Sora no Kaibutsu Aguii" (Aghwee the Sky Monster), where the protagonist consults with a doctor and kills his infant son who appears to have been born with a disability. But tormented by guilt, the man begins to see hallucinations of a monster baby.

Oe himself has remained close with Hikaru, and written essays about their daily lives--their leisurely walks together, and Oe's enjoyment of music composed by Hikaru.

But in his novels, he appears to have bared the darkest depths of his soul. In so doing, he reveals the complex reality of what it means to share one's life with a person who has disabilities.

Satoshi Uematsu, the accused in the Tsukui Yamayuri-en case, admitted to murdering people with disabilities because of his belief that their "inability to communicate breeds misery."

Such an "excuse" defies any normal, rational person's comprehension.

But what shaped Uematsu's belief? A comment he made, dating to his university student days, was revealed during his trial.

He once said, "If my child has a disability, I won't be able to raise it."

Now, how many of us can truly swear that we'd never, ever think or say such a thing?

Because of the utterly aberrant nature of his crime, we are tempted to simply dismiss it as "insane."

But is it, really?

This is the question that this case has raised, and will continue to do so.