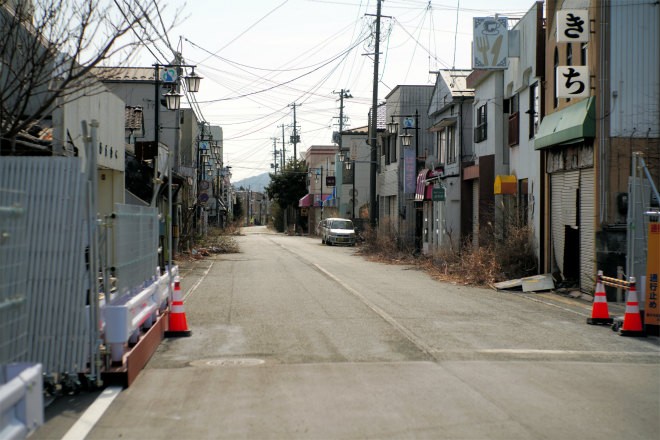 The difficult-to-return-zone around Ono Station on the JR Joban Line in Okuma, Fukushima Prefecture is empty on March 1. A part of evacuation order was lifted on March 5, but most of the area remains eerily the same as when the nuclear disaster happened in 2011. (Shigetaka Kodama)

The Sendai and Tokyo high courts recently said in separate rulings that Tokyo Electric Power Co. should pay more in compensation to victims of the 2011 accident at the company’s Fukushima No. 1 nuclear power plant.

Some 30 class action lawsuits have been filed by people who were forced to evacuate from their homes in the wake of the nuclear disaster to seek damages beyond the amounts the electric utility has agreed to pay.

The fact that the two rulings, the first high court decisions concerning these cases, both questioned the adequacy of the existing Fukushima compensation program is highly significant in its legal and policy implications.

During the trials, the plaintiffs argued that it is difficult to return to their homes even if the evacuation orders are lifted. Even if they return, they claimed, they will face local towns and communities that have been radically altered by the accident.

The two high courts acknowledged the seriousness of the corrosive effects of what these victims call “the loss and transformation” of their hometowns and ruled that they deserve to be compensated for this problem in addition to damages for being forced to flee their homes and the mental anguish caused by their lives as evacuees.

The courts awarded the plaintiffs additional damages beyond the amounts the company has already paid.

The utility has adamantly refused to pay any blanket compensation to victims beyond the amounts based on the guidelines set by the Dispute Reconciliation Committee for Nuclear Damage Compensation, a panel established within the government to settle disputes over compensation for victims of the Fukushima disaster.

The company has even turned down a compromise recommendation issued by the Fukushima District Court based on arguments during a trial over a compensation dispute it had heard.

Clearly, the company fears that accepting such a deal would affect the entirety of its compensation talks and cause the total of damages it has to pay to soar.

After the devastating accident, however, TEPCO made “three vows.” It pledged to pay compensation to all victims without leaving a single one uncompensated, ensure that compensation will be paid quickly according to individual circumstances and respect proposals to settle disputes.

As the company that is responsible for the unprecedented nuclear accident, TEPCO has a duty to make sincere responses to the high court rulings in line with its own vows.

The government, which has promoted nuclear power generation as a national policy and is effectively the largest shareholder of the utility, has the responsibility to provide strict guidance for the company’s actions concerning the matter.

The two rulings have also brought to the fore some shortcomings of the guidelines set by the dispute reconciliation committee.

Established immediately after the accident, the guidelines are obviously out of tune with the complicated realities of the accident’s aftermath despite several revisions that have been made.

The “loss and transformation” of hometowns is a consequence of the accident that has become clearly visible over the nine years that have passed since that day in 2011.

It is time for the government to have some in-depth debate on the effects of this problem on affected people and embark on a sweeping review of the guidelines.

The high court rulings are not totally acceptable, however. Arguing that the money TEPCO has already paid covers part of the additional damages owed to the victims, the rulings only awarded the plaintiffs 1 million yen to 2.5 million yen ($23,000) per head in additional compensation.

Many victims have criticized the amounts for being “too small to be fitting compensation for the actual damage” suffered by the victims.

There is no easy solution to this complicated problem. But that does not justify inaction in the face of such gross injustice.

All the parties concerned need to offer ideas and ingenuity to spare the victims the need to spend any more effort and time with regard to compensation issues.