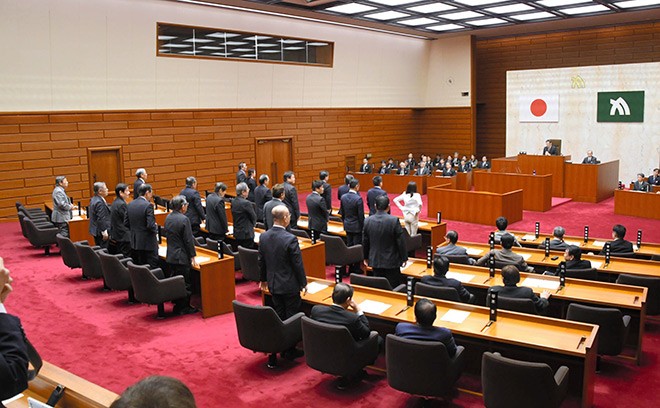 The Kagawa prefectural assembly passes the game ordinance by a majority vote in Takamatsu on March 18. (Kodai Kinoshita)

Kagawa Prefecture has become the first area in Japan to pass restrictions to curb addiction to games on smartphones and computers among children under 18.

Kids that age will be prohibited from playing the games for more than one hour a day (90 minutes on weekends) under an ordinance passed by majority March 18 in Kagawa's prefectural assembly.

But as the ordinance lacks any penalty, it will be up to parents to enforce it after it goes into effect from April 1.

The ordinance also prohibits kids of junior high school age or younger from using their smartphones or playing games after 9 p.m. High school students are allowed to do so until 10 p.m.

The ordinance states that excessive internet use and playing games on electronic devices among children is causing them to fall behind in school.

It also blamed the practice for contributing to poor physical conditions and vision levels of kids, and increasing the number who become "hikikomori" (social recluses).

In a standing vote, 22 assembly members voted to approve the ordinance and 10 opposed it. Eight members abstained.

A member who opposed the ordinance slammed it for being “an intervention in private households.”

Another said there “was not sufficient discussion” on its contents among the prefectural assembly's study committee, which compiled the ordinance.

The assembly member who proposed the ordinance in a plenary session of March 18 defended it, saying that it was just a guideline and citizens could choose to follow it or not.

However, some experts have raised doubts over the effectiveness of the ordinance in getting children to spend less time glued to their screens.

The ordinance was drawn up based in part on research by a medical institution that found people who played games on electronic devices for more than an hour a day on weekdays had lower study and work performance levels than those who did not.

But Takeo Nakayama, a professor at Kyoto University, specializing in health informatics, said that alone did not justify the restrictions on kids.

“We don't know which is the cause and which is the result for dependency on games and the decline of study levels by this research,” Nakayama said.

“We should be careful about placing a time restriction on kids for playing the games,” he added. “Doing so deprives them of part of their personal space.”

Yuki Honda, a professor at the University of Tokyo, specializing in educational sociology, also had trouble with the ordinance.

“It defines the relationship between parents and children based on a conservative notion (that parents should lay down the law at home),” Honda said.

“There are some big problems in how the ordinance was drafted, like not documenting the minutes of the study committee,” she added.