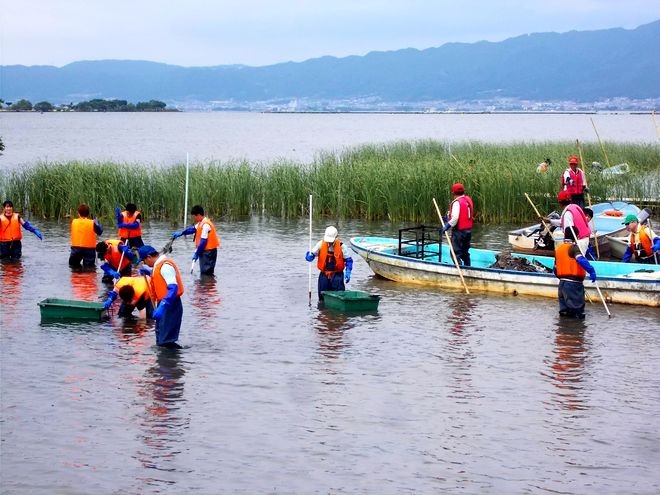 Workers engage in a cleaning campaign at Akanoi Bay in June 2019. (Provided by the Shiga prefectural government)

OTSU--Plastic accounts for more than 70 percent of waste on the bottom of Lake Biwako and poses a serious threat to species in Japan’s largest freshwater body, a survey showed.

In the first research of its kind, the Shiga prefectural government examined 2,231 liters of debris weighing 322 kilograms collected from the bottom of the lake’s Akanoi Bay in Moriyama in June 2019.

Around 530 liters, or 23.8 percent of the plastic, came from bags, according to the study. One bag for bread showed a best-before date of 1990, indicating that plastic bags have been accumulating on the lake bottom for decades.

“Accumulated plastic fragments could change the environment on the lake bottom, making it difficult for the Corbicula sandai clam and other indigenous species to inhabit there,” said a representative of the prefecture’s Lake Biwa Conservation and Restoration Division. “Efforts must be made to reduce the amount of plastic debris that could produce microplastics.”

This waste is believed to have been carried from agricultural fields to the lake in recent typhoons and torrential rainfalls.

Among non-plastic debris, construction timber and driftwood accounted for 292 liters, or 13.1 percent of the total, while cloth products totaling 115 liters, or 5.2 percent, were also discovered.

Volunteer citizens and officials from the local fishery industry have been cleaning the bay, which is connected to eight rivers, since 2018.

The prefectural government had previously analyzed waste that had washed ashore around Lake Biwako, but not on the lake bottom. In 2015, it found that plastic bottles, trays and other such products accounted for 40 percent of trash retrieved from the shore.

Plastic fragments in waters are said to generate microplastics.

A team from Kyoto University reported in 2016 that it detected 2.6 microplastic pieces per cubic meter on average in the southern area of Lake Biwako. Microplastics were also found in nine, or 30 percent, of 31 Japanese smelts.

The impact of microplastics on human health and local ecosystems has yet to be made clear.