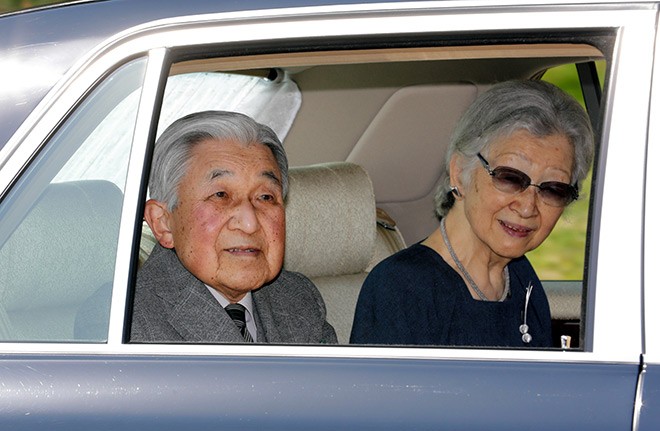 Emperor Emeritus Akihito and Empress Emerita Michiko move out of the main Imperial Palace on March 19 due to the imperial succession. (Pool)

Emperor Emeritus Akihito and Empress Emerita Michiko moved out of the Fukiage Sento Palace where they had lived for 26 years on March 19 before their eventual settlement in the Akasaka Imperial Palace.

Akihito and Michiko left the Fukiage Sento Palace in the Imperial Palace around 10 a.m. by car.

Emperor Naruhito, Empress Masako, Princess Aiko and Crown Prince Fumihito and their family saw them off.

Their car passed near the Three Shrines of the Imperial Court where court rituals were held and went outside the palace.

Officials of the Imperial Household Agency who were lining up for about 250 meters gave the couple a big round of applause. Akihito and Michiko smiled at the officials and bowed slightly.

Akihito and Michiko will first stay at the Hayama Imperial Villa in Hayama, Kanagawa Prefecture, and then at the Imperial Stock Farm in Takanezawa, Tochigi Prefecture. They will move into the Takanawa Imperial Residence in Tokyo's Minato Ward on March 31, where they will temporarily reside.

The officials to support the emperor emeritus and empress emerita will also move into the Takanawa Imperial Residence area.

The Fukiage Sento Imperial Palace, where Akihito and Michiko had lived for many years, will now go under renovation.

After the work is complete, the emperor,  empress and their daughter, Princess Aiko, will move in there from the Akasaka Imperial Palace, where Akihito and Michiko will live.