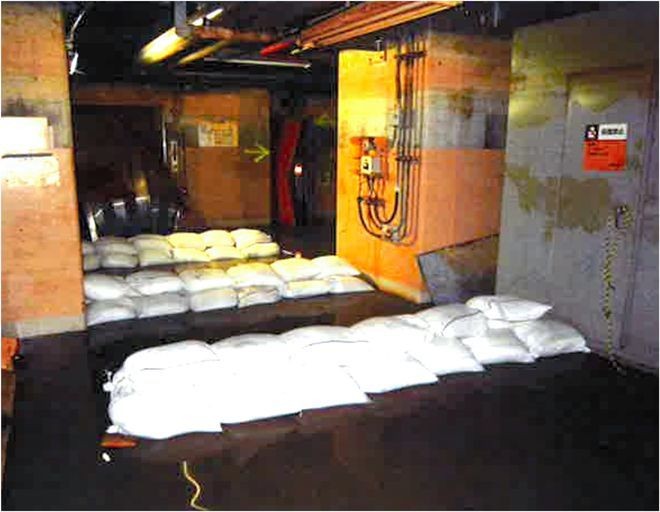 Sandbags sunk in the basement of a high-temperature incinerator building at the Fukushima No. 1 nuclear power plant shortly after the 2011 nuclear crisis flared (Provided by Tokyo Electric Power Co.)

Sandbags placed as an emergency measure to lower radiation levels of contaminated water in the aftermath of the 2011 nuclear disaster now turn out to be so highly radioactive they pose an obstacle to the decommissioning of the stricken Fukushima No. 1 nuclear power plant.

A recent survey showed that the materials are in such a hazardous state that plant operator Tokyo Electric Power Co. is having to postpone its program to discharge the contaminated water.

“The sandbags should be removed, but that will not be so simple,” said an official of the Nuclear Regulation Authority.

TEPCO is struggling to find ways to safely remove 26 tons of sandbags in the basements of two buildings near the No. 1 to No. 3 reactors, where a triple meltdown occurred. They were packed with a mineral called zeolite to absorb radioactive cesium.

They are emitting radiation levels of up to 3 to 4 sieverts per hour, which would kill half of the people exposed to the high reading for an entire hour.

Soon after the nuclear crisis began to unfold, TEPCO used the two buildings as substitutes for tanks to temporarily store a huge volume of heavily contaminated water produced on the plant site.

In doing so, the zeolite-packed sandbags were installed on the floors of the buildings' basements to absorb radioactive substances in the water.

Interest in the sunken sandbags waned as the years passed, but the issue surfaced again in December 2018 when TEPCO measured radiation levels in the two buildings’ basements in preparation for removing radioactive water there.

Significantly high radiation levels were detected just above the floors.

A zeolite sample collected from the sandbags recorded a cesium concentration of about 130 million becquerels per gram.

TEPCO has been forced to delay the water removal procedure at the two buildings to fiscal 2023 or later. It initially planned to finish the process by 2020. If it doesn't have countermeasures in place when the water is released, the highly radioactive sandbags will be exposed to air.

TEPCO is now weighing ways to safely dispose of the contaminated materials. One idea is to suck up the zeolite from floors above ground and store it in other receptacles, and the other is to pack the material in different containers in water for temporary storage.

But officials acknowledge that those measures will not eliminate all safety risks.