Coronavirus steps working, but an ‘explosion’ of cases in sight 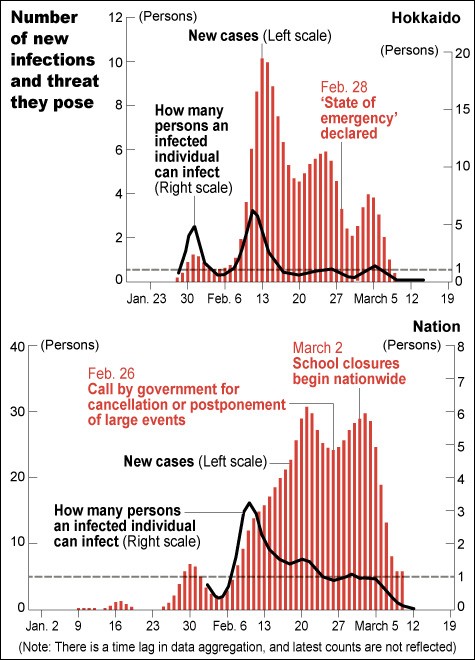 Steps already taken to contain the spread of the coronavirus are holding up, but there are worrying trends on the horizon that could lead to an explosion of infections, a panel of experts advising the government on how to handle the crisis said March 19.

As a continuing precaution, it called on organizers to keep postponing or cancelling large public events if they are unable to implement effective preventive measures.

Assessing steps taken to date, the panel said the measures are “holding up even though the virus has spread in some areas.”

The government is expected to weigh measures to stem the contagion in the coming weeks based on the panel’s assessment and recommendations.

At a meeting held Feb. 24, the panel warned that Japan was headed for a rapid increase in infections if people didn't take adequate precautions.

It urged the public to stay away from enclosed spaces with poor ventilation as well as venues where large crowds gather and to avoid conversing with others in close proximity.

Not following these three basic guidelines heightened the risk of people becoming infected, the panel warned.

In its latest assessment on March 19, the panel said Hokkaido, the hardest-hit area of Japan as of late February, was able to slow the contagion to some degree after the governor of the northernmost main island declared a “state of emergency” on Feb. 28.

It noted that if an infected person infects more than one individual, the virus will inevitably spread. Conversely, it can be contained if the infection rate is lower than one.

In Hokkaido, the rate was one or so before the governor issued a state of emergency. But after the declaration, there were many days when the figure was below one. The number of new cases in Hokkaido dropped to just a few in recent days.

However, the panel expressed alarm at a rise of infections in urban areas elsewhere.

New infections have been particularly prevalent in facilities used by senior citizens, an age group most vulnerable to developing pneumonia-like disease triggered by the new coronavirus.

Infection clusters have also emerged in many parts of the country and the number of new cases in which routes of transmission were not detected is increasing.

If these trends continue in coming weeks, the experts warned it could lead to "overshoot," an explosion of coronavirus cases.

To avert such an alarming situation, the panel called on the government to secure manpower to assist experts in detecting infection clusters early on and identifying those who may already be infected.

Deciding when to impose or lift a voluntary ban on large public events should be judged on the basis of the rise of infection in local regions, not nationwide, the panel said.

It also recommended that in prefectures with no confirmed infections, local authorities should start with low-risk school activities, outdoor sporting events and culture and art shows at public venues after evaluating the risks of holding such gatherings.

As for nationwide school closures, the panel said it is hard to conclude definitively whether it has had any effect in stemming the spread of the virus.

But it cautioned, “Shutting down schools for a certain period in regions where the rate of infection is expanding is an option,” given the possibility that infected children with minor symptoms can still transmit the virus to the elderly.

With regard to a voluntary ban on large public events, the panel said it is also difficult to gauge how effective the measure has been.

It urged organizers to continue to assess risks and decide with caution, as large events can trigger new infections.

That day, the overall death toll rose to 40 as a man in his 70s in Higashi-Osaka, Osaka Prefecture, and a woman in her 80s in Itami, Hyogo Prefecture, died of complications from the coronavirus.

Among new infections reported that day were two male employees of the Wakayama city government. The men, who are both in their 50s, worked in sections that do not require any interaction with residents.

The city government said it would disinfect the offices where they worked as well as the communal space that they shared with their colleagues.

In Niigata Prefecture, a girl attending a municipal nursery school tested positive for the virus. The child was apparently infected by a staff worker at the school whose infection has been already confirmed.

The new infections include those who recently returned from overseas.

Of the new cases in Kanagawa Prefecture, four had traveled to Spain, France, Egypt, China and other countries.

As of March 19, overall infections came to 938 cases in Japan, excluding the cases aboard the cruise ship Diamond Princess.