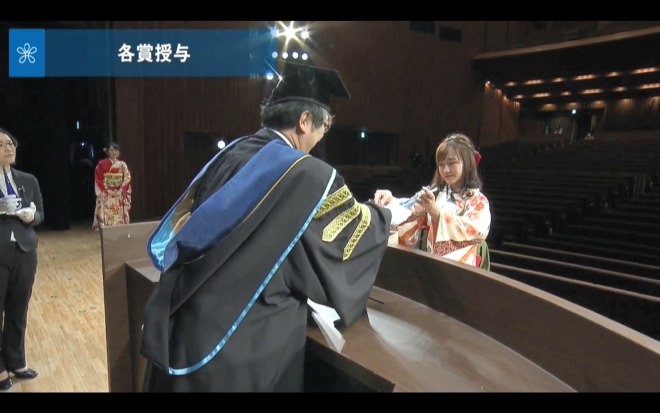 Universities across the nation are turning to digital technology to stream commencement ceremonies and announcements after graduation events were called off due to the new coronavirus outbreak.

Kindai University in Higashi-Osaka, Osaka Prefecture, held a “cyber commencement” on March 21 with Yoshihiko Hosoi, president of the university, and only 15 others, including representatives of the graduating seniors, in attendance .

The commencement was held at a hall on campus and streamed on YouTube and the Nico Nico Douga video distribution service.

“I appreciate the university’s arrangement to hold a special commencement using the Internet at a time the world is going through a difficult time,” the valedictorian said.

University officials said they wanted to do something memorable as the graduation ceremony is a once-in-a-lifetime event for students.

University officials on March 11 shot a video of President Tetsuo Arakawa in his ceremonial garb delivering his address while congratulating graduating seniors and handing out graduation certificates.

“The video will allow students to feel as if they actually attended the ceremony,” said one official.

The university will also stream a message from Nobel Prize-winning stem cell researcher Shinya Yamanaka, who attended the university’s graduate school, and a slide show featuring memorable events for the students.