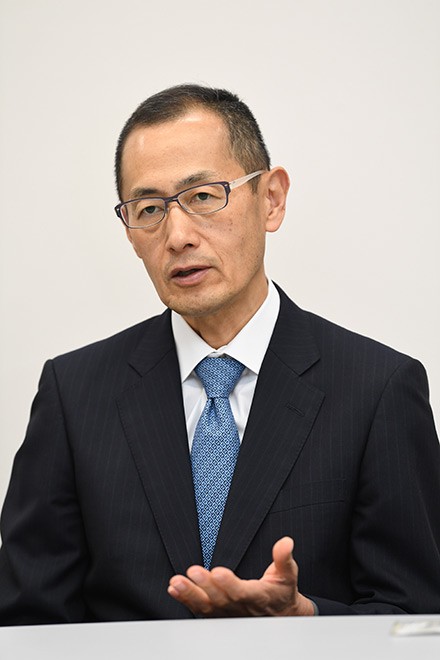 Shinya Yamanaka, Nobel Prize-winning stem cell biologist, in an interview with The Asahi Shimbun in Kyoto on March 19 (Kenta Sujino)

Nobel Prize-winning stem cell biologist Shinya Yamanaka has signed up for the fight against the new coronavirus, describing the battle as “a long marathon that may last a year and not a short sprint.”

In an interview with The Asahi Shimbun, Yamanaka said he started his own website to disseminate accurate information that he can readily provide.

“If people get tired or drop their guard, the infection could spread at the speed of a breath and cause the collapse of public health care systems and social turmoil,” he said on the website. “Each individual needs to keep running at a pace based on their needs arising in their families or work.”

Yamanaka, a harbinger in research of induced pluripotent stem (iPS) cells, said that he decided to branch out at a time of need in the world.

“Research on iPS cells is important, but it will take time before the iPS cell technology is applied in the real world,” said Yamanaka, director of Kyoto University's Center for iPS Cell Research and Application, on March 19. “I want to contribute to help cope with a formidable threat that people have been faced with now.”

He also said although he is not a specialist of infectious diseases, he could grasp the big picture of the coronavirus through reading numerous studies on the subject.

“I would like the public to have an accurate understanding of the coronavirus within the scope of their knowledge,” said Yamanaka, co-winner of the Nobel Prize in Physiology or Medicine in 2012.

His website lists findings about the virus that causes COVID-19, a pneumonia-like disease, labeling those supported by strong evidence and others lacking in it.

The website, which was started on March 13, also carries information from studies, news reports and data that is scientifically supported, citing their sources.

Yamanaka was originally an orthopedist. But after he began researching stem cells, he succeeded in creating iPS cells in mice in 2006 and in humans in 2007.

On his website, he also gives his take on the cancellation of the high-profile spring national high school baseball tournament, which was scheduled to open this month.

He said the decision was intended to protect the safety of not only the players, but also the elderly around them and the public health care system from a sharp rise in the number of patients.

Yamanaka also has a lab at the Gladstone Institutes in San Francisco, which is known as a research pioneer on iPS cells.

But he noted that his colleagues there have been unable to work on their projects because access to the facility has been restricted due to the spread of the coronavirus in the United States.

He called the current situation in Japan “dangerous” as many people continue to go out, compared with the United States where many areas have imposed curfews and lockdowns.

(This article was written by Kazuya Goto and Roku Goda.)