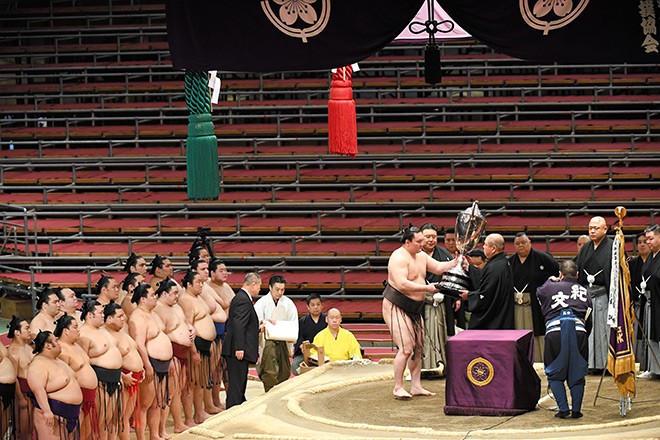 Yokozuna Hakuho receives the Emperor's Cup at the Spring Grand Sumo Tournament at Edion Arena Osaka, with no spectators in the stands, on March 22. (Kenta Sujino)

OSAKA--Against a bizarre backdrop of an empty arena, Hakuho extended his record career championship total to 44, defeating fellow yokozuna Kakuryu on the final day of the Spring Grand Sumo Tournament here on March 22.

Hakuho forced out Kakuryu after a stirring tussle that matched power against power to finish at 13-2. Kakuryu fell to 12-3.

The 15-day tourney at the Edion Arena Osaka marked the first time in 75 years since World War II that it was held without spectators after the spread of the new coronavirus in Japan.

But the tournament had a fitting climax in the first showdown between two grand champions in a tie on the final day in seven years, and a return to normalcy with Hakuho hoisting the Emperor's Cup.

Kakuryu entered the tournament in Osaka after pulling out of the three previous tourneys in a row. He had two losses by the end of the sixth day of the tournament, raising doubts about whether he could compete for the championship.

But he shook off the rust and returned to form as he won his next eight bouts in a row to set up the final-day showdown for the title.

Hakuho, who turned 35 on March 11, opened with nine straight wins before losing on the 10th day. He also lost on the 12th day, letting rank-and-file wrestler Aoiyama seize the sole lead with one loss.

But Aoiyama, a maegashira No. 13, fell in the next two bouts in a row after that, including losing to Hakuho on the penultimate day, shattering his hopes for an unlikely Emperor’s Cup.

On the final day, sekiwake Asanoyama defeated ozeki Takakeisho to collect his 11th win. The 26-year-old is expected to be promoted to the second highest rank of ozeki, sources close to the Japan Sumo Association said.

Asanoyama has posted 10 or more wins for four consecutive tournaments.

With the coronavirus spreading in Japan, the JSA made the tough call to proceed with the scheduled spring tournament. It did so with health safeguards in place, such as daily temperature checks of wrestlers, altered rituals including no drinking of ceremonial water from a ladle and no spectators.

Before the tournament kicked off on March 8, the JSA said the competition would be called off if a wrestler tested positive for the virus.