Want sushi, but worried about other customers? Problem solved 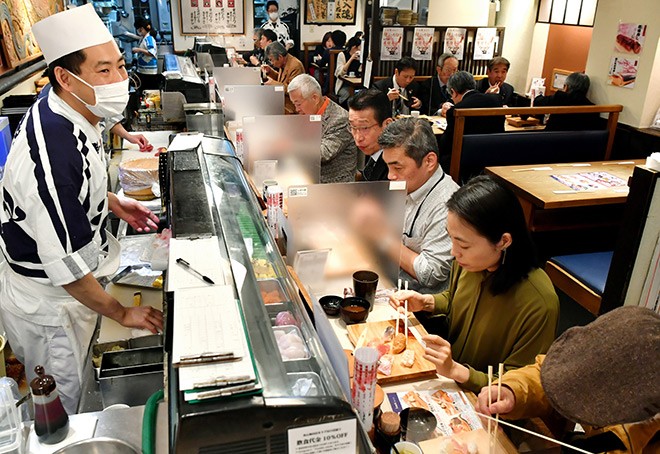 Acrylic partitions allow customers to enjoy sushi in a “private space” at a restaurant in Osaka’s Kita Ward on March 19 as Japan copes with the spread of the new coronavirus. (Mari Endo)

OSAKA--A company here is marketing acrylic partitions so customers seated at restaurant counters such as sushi outlets can have a relaxing meal in a "private space" without having to worry about others coughing and sneezing.

“We want people to be able to enjoy their meal without any worries, seeing as they choose to come in such turbulent times," said restaurant manager Kenji Zenihiro.

The self-supporting 40-centimeter by 40-cm partitions were sold by Syscle Co., a retailer of car batteries based in Higashinari Ward.

They are tall enough to shield customers, but not to the extent they block the view.

The product is the brainchild of the company’s president, Hiromitsu Miki, 52. Miki hit upon the idea for the product after getting annoyed at a restaurant by a customer seated next to him who was coughing and sneezing.

The company said it has received 20 inquiries about the product from restaurants in Tokyo and Osaka as well as medical institutions and other businesses.