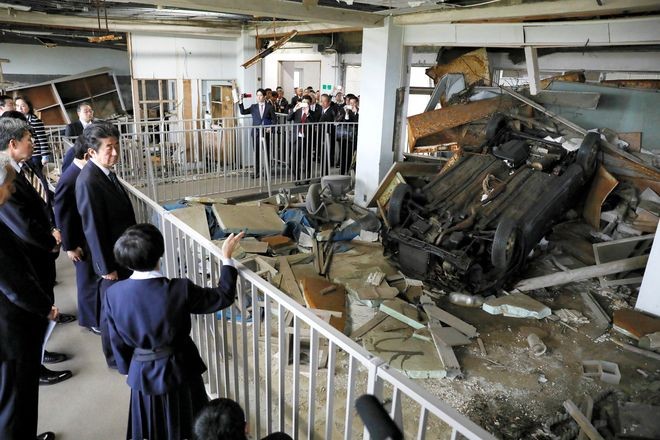 Prime Minister Shinzo Abe visits the memorial museum in Kesennuma, Miyagi Prefecture, on Nov. 24, 2019. The museum features the former building of Kesennuma Koyo High School, which was badly damaged by the Great East Japan Earthquake and tsunami on March 11, 2011. (Pool)

Traumatized communities in the Tohoku region devastated by the Great East Japan Earthquake and tsunami have been vacillating between opposing viewpoints toward distressing memories of the disaster during the past nine years.

Many survivors are reluctant to remember the harrowing tragedies that befell their families and communities on March 11, 2011, but they also think they cannot forget them and do not want people to forget them.

Their struggles have been crystallized in local community debates on what to do with the remaining parts of buildings and other structures destroyed by the tremendous forces unleashed by the disaster.

A newly established memorial museum in Kesennuma, Miyagi Prefecture, one of the hardest-hit cities, attracted some 84,000 visitors in its first year. The facility features the badly damaged school building of Kesennuma Koyo High School, which has since been relocated to a new area in the city.

The towering tsunami reached the fourth floor of the main school building. But students fled the school and took refuge on a hill, while remaining teachers and other staff members escaped to the roof in the nick of time.

The building still has ugly scars left by the disaster, such as an exterior wall that was severely damaged when it was hit by a drifting refrigeration factory and a vehicle in a classroom that was left upside down. All these remnants from the disaster have been kept as warnings about the destructive force of tsunami for future generations.

But these remnants inevitably awaken painful memories in the minds of survivors.

Some affected local communities have been divided over whether these visible reminders of the calamity should be preserved or dismantled.

The school building of the former Kadonowaki Elementary School in the city of Ishinomaki is one of the few remaining structures that were damaged by fires of cars and wreckage caused by the tsunami. Such fires are known as “tsunami kasai” (tsunami fires).

The city considered preserving the fire-ravaged school building as it was, but the local community was uncomfortable with the idea. A survey of people born in the community conducted four years after the March 11 disaster found that about half of the respondents wanted the building to be demolished and removed.

The finding led to the municipal government’s decision to preserve only a part of the building and plant trees around it to make it invisible to local residents.

As the start of the work drew near, however, many community members started calling for preservation. They argued that it was vital to keep the entire building to show future generations how the tsunami and fires struck it and how local residents escaped from them.

In meetings between municipal government officials and residents to discuss the issue, some participants said their thoughts about the issue had changed as the city had recovered from the disaster.

In the end, however, the local government decided to stick to the original plan. The dismantling of the building started last autumn and is scheduled to be completed by the end of this month.

Survivors’ stances to such reminders of the disaster have apparently changed in subtle ways from the times when their memories of the devastation were still very vivid and they were struggling to rebuild their shattered lives.

Once dismantled, these buildings can never be restored. But preserving them as monuments to the disaster may fail to achieve its purpose of offering lessons for future generations unless residents are willing to support such projects.

The town of Minami-Sanriku in Miyagi Prefecture faced the same dilemma. The municipal government decided to tear down the damaged building that was used for its disaster-related operations.

In response to opposition voiced by people both inside and outside the town, however, the local government has postponed the final decision to 2031.

Leaving the decision to future generations could be a wise approach to tackling this conundrum.

The decision to preserve the Atomic Bomb Dome in Hiroshima was made more than two decades after the city was struck by an atomic bomb in 1945.

Preserving remnants of a disaster ensures that visible symbols of memories and lessons from what happened will remain in the affected areas.

It has also been decided that the building of the former Okawa Elementary School in Ishinomaki, where 74 students were killed by the tsunami, will be preserved. Work to turn the building into a facility to hand down memories and lessons to future generations will soon start.

There are more than 40 such facilities where guides and local residents tell what happened to visitors in the four affected Tohoku prefectures, according to an association of the central and local governments set up for this cause.

Deciding on which remnants of a disaster should be preserved and how this should be done is a challenge that is not restricted to areas hit by an earthquake but is common to all areas affected by natural disasters, be it volcano eruptions or storms and flooding. This is a challenge people living today should tackle.

All these struggles and various attempts in local communities affected by the Great East Japan Earthquake also offer valuable lessons for the future.