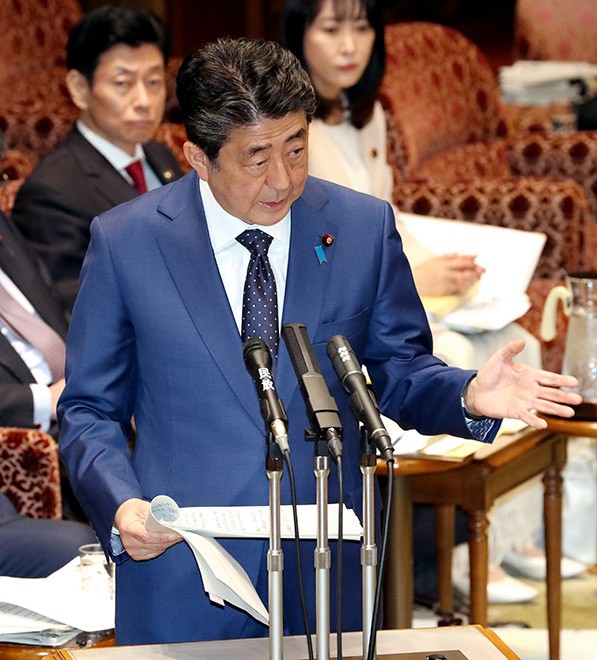 Prime Minister Shinzo Abe answers a question from a lawmaker during a March 23 meeting of the Upper House Budget Committee. (Takeshi Iwashita)

Prime Minister Shinzo Abe on March 23 said he would accept a postponement of the 2020 Tokyo Olympics, depending on the decision by the International Olympic Committee.

The IOC is now weighing a delay due to the novel coronavirus pandemic.

“When it is difficult to hold the Summer Games in a complete format, we will have no choice but to postpone it,” Abe said at the Upper House Budget Committee meeting, when asked about the IOC's latest move.

But the prime minister ruled out calling off the sports extravaganza. The Olympic Games are scheduled from July 24 to Aug. 9, followed by the Paralympics from Aug. 25 to Sept. 6.

“A cancellation is not in our options,” Abe said, responding to questions form Masahisa Sato, an Upper House member of Abe’s Liberal Democratic Party. “I believe that the IOC thinks the same way in this respect.”

The prime minister said he conveyed his opposition to the cancellation to IOC President Thomas Bach the night of March 22 via Yoshiro Mori, the chief of the Tokyo 2020 Olympics organizing committee.

At the committee meeting, Abe said his stance has been that the Games should be held in a "complete format" as a sign of that the global community had overcome the coronavirus.

He reiterated his policy that he mentioned at a video conference of the Group of Seven leaders on March 16 that Japan did not intend to scale back the Games and that spectators will enjoy the excitement of the Olympics.

However, Abe said the safety of the athletes outweighed any need to maintain the original schedule for the event.

“We are giving a top priority to athletes and will have to postpone the Games if it is difficult to hold them,” he said.