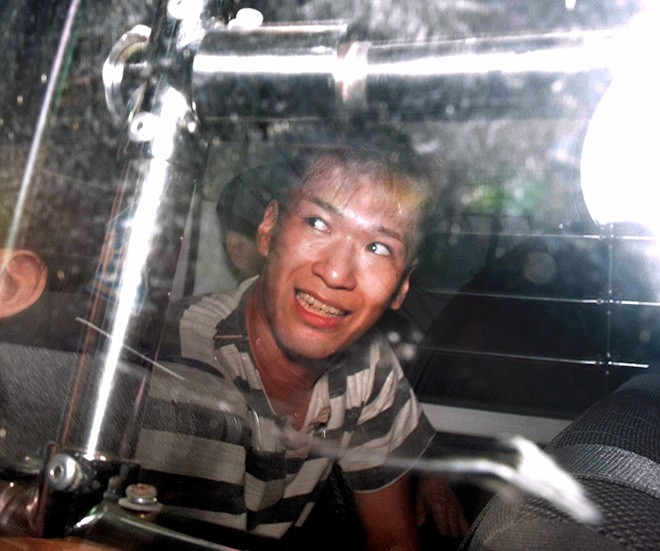 Satoshi Uematsu is sent to prosecutors on July 27, 2016, a day after his arrest in Sagamihara’s Midori Ward in Kanagawa Prefecture. (Asahi Shimbun file photo)

YOKOHAMA--A man convicted of committing one of the worst mass murders in Japan’s history said he will not appeal his death sentence and showed no remorse for his actions or sympathy for his victims.

Satoshi Uematsu, 30, was found guilty of murdering 19 disabled people at the Tsukui Yamayurien care home in Sagamihara, Kanagawa Prefecture, and other charges.

The Yokohama District Court on March 16 sentenced him to death.

Uematsu told an Asahi Shimbun reporter at a detention facility in Yokohama’s Konan Ward on March 24 that he would drop the case even if his defense lawyers filed an appeal.

“I had expected to be given the death sentence, but I’m not satisfied with the contents of the trial because it proceeded on the assumption that people with disabilities have human rights,” he said.

The deadline for an appeal is March 30.

During the lay judge trial at the district court, Uematsu, a former employee of the facility, admitted to carrying out the stabbing rampage in July 2016 that also injured 26 others.

He has said that society would be better off without disabled people.

Looking back on the trial, Uematsu said: “It was solemn. I’m grateful to everyone who spent time on the trial.”

When asked if he wants to live, Uematsu immediately replied, “I’d love to.”