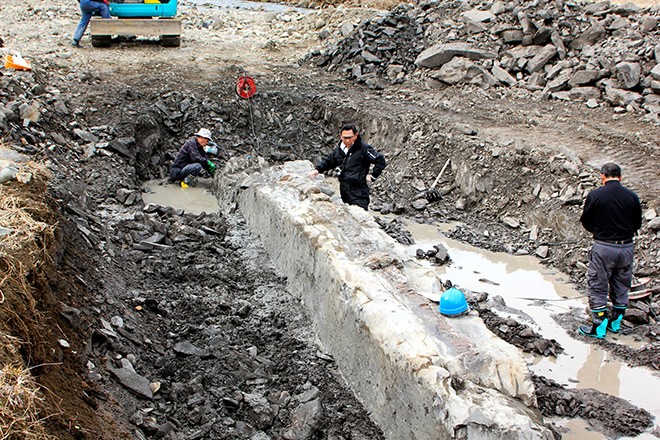 Researchers excavate a fossilized skeleton of a beaked whale on the Uranogawa riverbed in Ueda, Nagano Prefecture. (Provided by the Ueda city board of education)

UEDA, Nagano Prefecture—A nearly complete fossilized skeleton of a beaked whale dating back 13 million years has been unearthed here, the first discovery of its kind in the Northern Hemisphere.

The Ueda city board of education said the fossils are believed to have come from a mature male whale measuring 8 meters long.

“It is like a miracle that the remains of such a large animal as a whale have been unearthed with their original structure maintained so well,” said a board official studying the fossils.

There has been only one other finding of a full whale fossil in the prefecture.

The board expects the remains to provide key clues on how whales evolved. The fossils are expected to be put on public display, but a schedule has not been set.

The fossils were unearthed from the bottom of the Uranogawa river in the Tsuiji district. Hideshi Suzuki, 55, a geology teacher at Nagano Ueda Someyaoka High School, alerted the board to the remains in May last year.

The board started an excavation survey in February to coincide with the beginning of the dry weather.

The carcass was found in a prone position. The fossils of its lower jaw, head, neck, chest, lower back and tail showed no signs of damage.

The fossils were likely squeezed horizontally between the strata. The head is a paltry 36.5 centimeters wide while the other body parts are no more than 25 cm wide.

The upper jaw was apparently lost due to water erosion.

Based on the 19.5-cm-long, cone-shaped fang at the tip of the lower jaw and other bodily features, the board of education concluded that the fossils were of a male adult beaked whale.

The Uranogawa riverbed consists of layers of mudstone formed from 12.9 million years ago to 12.5 million years ago. The area was at the bottom of the sea around that time, and mud is believed to have accumulated on the dead whale on the seafloor.

The fossils likely emerged above ground through river erosion and tectonic movements.

The remains were cut out in three blocks with the surrounding mudstone for storage at a municipal facility.

The shoulder blade, humerus and other parts are expected to be revealed through impurity removal work starting in April. The researchers have not ruled out the possibility that they are dealing with an unknown species.

According to the board of education, full fossilized bone structures of whales are rare in Japan.

In one case, the fossilized remains of a sperm whale were discovered in Matsumoto, Nagano Prefecture, in 1986. The finding has been designated a natural treasure by the prefectural government.

The full skeleton of a beaked whale was confirmed in Peru. But the beaked whale fossils in Ueda are the first ones found north of the equator, according to the officials.