The new test car of the Linear Chuo Shinkansen Line is unveiled in front of the media in Kudamatsu, Yamaguchi Prefecture, on March 25. (Motoki Nagasawa) 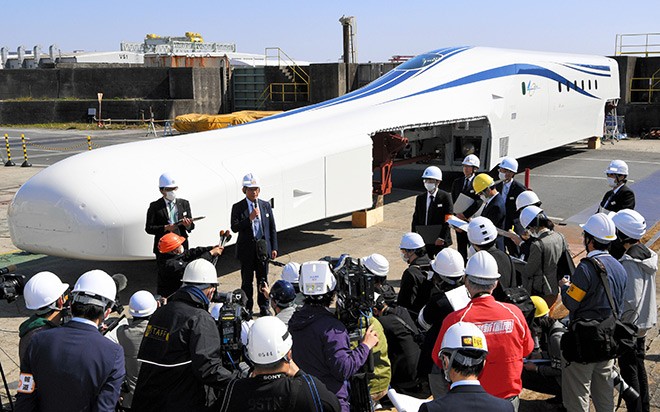 The new test car for the Linear Chuo Shinkansen Line is shown to the media for the first time in Kudamatsu, Yamaguchi Prefecture, on March 25. (Motoki Nagasawa)

It is expected to have a first test run around the end of May on a dedicated track in Yamanashi Prefecture after it is taken out of the factory of Hitachi Ltd. here by the end of March.

The company unveiled it for the first time to the media on March 25.

“We have reached 80 to 90 percent completion,” said Motoaki Terai, the chief director of linear department of JR Tokai. “We will improve the comfortableness and other aspects further.”

The front car's aerodynamic, uneven shape reduces the amount of air resistance by 13 percent when compared against the conventional L0 Series maglev Shinkansen, according to the railway company. That reduces the train's overall noise and power consumption.

The new model draws electricity wirelessly from the ground to power the air conditioner and vehicle lights, meaning it will no longer require an internal power generator for the purpose.

Terai said the project is currently in a data collection phase, but the railway company will eventually consider trial boarding for the public.