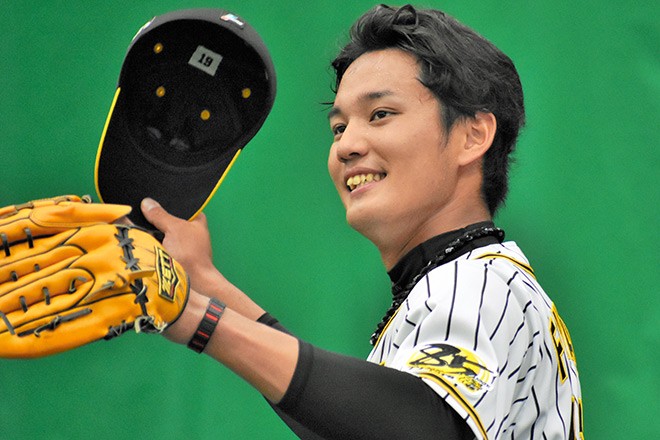 The Tigers, a wildly popular Nippon Professional Baseball team based in Nishinomiya, Hyogo Prefecture, immediately went on hiatus for a week, canceling practice games and other activities.

“He doesn’t have a fever, cough or feel fatigued,” said Osamu Tanimoto, who heads the Tigers, of Fujinami at a news conference that day. “But he doesn’t have a sense of smell.”

He was the first draft pick for the Tigers and joined the team in 2013. One of his peers is Shohei Otani of Los Angeles Angels.

Fujinami noticed that he couldn't smell coffee and told a team trainer about the unusual symptom on March 24. He went to two hospitals in the prefecture and received the diagnosis, “It's likely just a seasonal allergy.”

But the malady did not go away on the following day. Fujinami was referred to another hospital by a team doctor and told that it might be an early symptom of the new coronavirus.

He then reported to a public health center and took a polymerase chain reaction (PCR) test. He also alerted NPB and a doctor who serves as a regional adviser on the task force that NPB officials established jointly with the professional soccer J.League to assess the virus outbreak on their respective sports.

The officials asked Fujinami about his activities in the past two weeks.

Fujinami told the officials that he dined with numerous teammates on March 14 after a preseason game against the Orix Buffaloes at Kyocera Dome in Osaka.

Nagasaka and Ito told team officials on March 26 that both “don’t have a sense of taste in eating miso soup.” The officials ordered them to go to a hospital.

They both took coronavirus tests and the results came back positive.

The news has turned the team upside down and forced officials to respond quickly.

The Tigers hastily canceled the farm team’s practice game against the Fukuoka SoftBank Hawks scheduled on March 26 at Hanshin Naruohama stadium in Nishinomiya. Both teams had already arrived at the stadium when the cancellation was announced.

The Tigers also canceled all team activities at least for a week.

Manager, coaches, players and staff were told to stay home and “do not come to work until the team issues its next protocol,” Tanimoto said.

Players living in a farm team dormitory were asked to vacate and relocated to another accommodation.

“In half a day or so, reports of players suspected of infection have come in one after another,” Tanimoto said. “We should handle the situation very carefully.

“We will do everything possible not to create a ‘cluster’ of infection under any circumstances,” he said.

Fujinami’s unusual symptom came as a surprise to many in and outside the baseball world.

Impairment of smell and taste was not on the list of signs of COVID-19 provided by health experts at the joint NPB and J.League task force.

Utah Jazz center Rudy Gobert, the first NBA player to test positive for COVID-19, tweeted that he lost the ability to taste and smell.

Many, including Darvish, 33, praised Fujinami’s self-awareness and willingness to come forward.

“Fujinami came forward simply because he sensed something unusual in his sense of smell. That’s amazing,” Darvish wrote on his Twitter account. “It’s evident that he has collected information and been acutely aware of his body.”

NPB has postponed the season opener until April 24, based on a recommendation by the panel’s experts of infectious diseases.

According to the experts’ proposal, the NPB should order a patient infected with the disease to remain in the hospital or stay at home. Those who have close contact with the infected person are also asked to remain at home.

Other players and staff are allowed to participate in practices and games as scheduled in principle. The team as a whole can proceed with regular activities, while taking more strict measures such as checking players' temperatures, according to the proposal.

The experts also recommended that players stagger their times in the locker and shower rooms. Players who play the same position are urged not to gather together as much as possible.