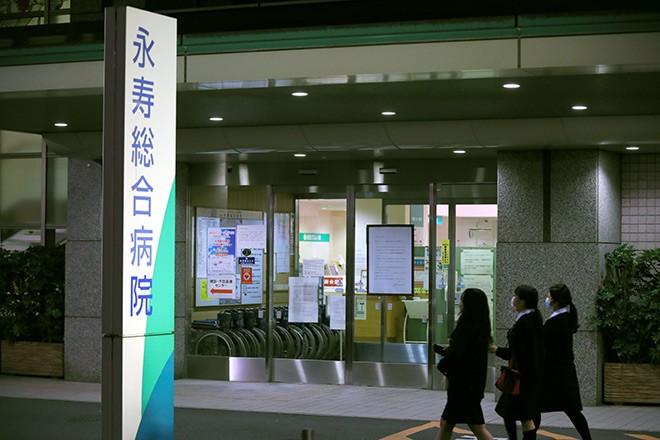 Eiju General Hospital in Tokyo’s Taito Ward where dozens of new coronavirus infections have been confirmed as of March 28. (Asahi Shimbun file photo)

As many people across Japan were heeding their governments' request to stay home over the weekend, the number of novel coronavirus infections continued surging on March 28, with a record 203 reported nationwide.

The number is nearly double the new cases reported the previous day.

The reports show that the virus is rapidly spreading around the capital, with Tokyo and neighboring Chiba Prefecture setting new highs of 63 and 62 on March 28, respectively.

In Tokyo, fewer than 50 new cases had been reported in each of the previous three days.

The overall total of infections to date in Tokyo now stands at 362 and in Chiba Prefecture at 130.

In Tokyo, 29 of the 63 new infections were confirmed at Eiju General Hospital in Taito Ward, where more than two dozen patients and medical personnel had already tested positive.

In Chiba Prefecture, an additional 57 infections were reported at Hokuso Ikusei-en, a facility for people with intellectual disabilities, in the town of Tonosho. Of these, 31 were staff workers.

The facility was established by the Funabashi city government in the prefecture.

The 57 new cases were confirmed when health authorities tested workers and users of the facility for the new coronavirus after a female worker in her 40s there was confirmed infected on March 27.

Authorities said 26 of the infected showed no symptoms of COVID-19, a pneumonia-like disease caused by the coronavirus.

In a similar development, the National Cancer Center Hospital in Tokyo’s Chuo Ward announced the infections of two nurses working in the same ward of the hospital.

The two did not develop fevers or respiratory problems, but one nurse, who is in her 20s, reported losing her sense of smell and taste from March 18 and the other, who is in her 30s, experienced the same symptoms from March 21.

They underwent testing for the coronavirus after the Hanshin Tigers announced on March 27 that its star pitcher Shintaro Fujinami and two teammates testing positive for COVID-19. The three had complained of similar symptoms.