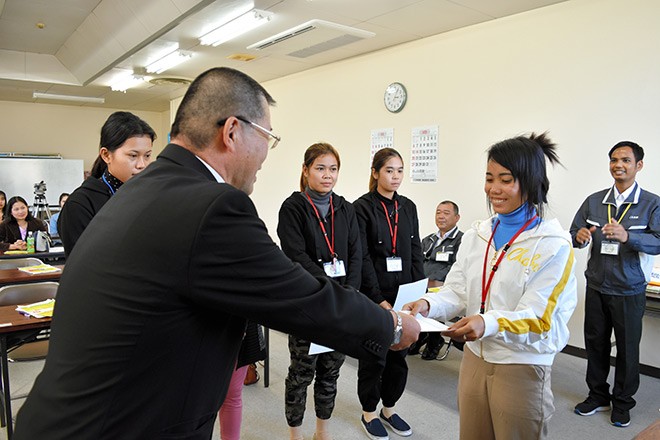 A Cambodian woman receives a letter of appointment on Oct. 21, 2019, to work in the agriculture industry in Aso, Kumamoto Prefecture. She arrived in Japan on the newly established “specified skills” visa. (Asahi Shimbun file photo)

Around 2.93 million foreigners were living in Japan as of the end of December, a record high propelled by a surge in technical trainees and overseas students, the Immigration Services Agency said.

However, the streak of five straight years of increase could end in light of the international travel restrictions in place to deal with the novel coronavirus pandemic.

By residence status, permanent residents made up the largest group at about 790,000, an increase of 2.8 percent from the number at the end of December 2018.

They were followed by technical intern trainees who totaled a record high of about 410,000, up 25.2 percent.

But the number of foreign workers living in Japan on the “specified skills” visa was only 1,621, a far cry from the government’s projection of up to 47,000 in the first year of the visa.

The visa was established in April 2019 to attract foreigners to work in Japan to fill labor shortages in various industries.

The number of foreigners overstaying their visas was 82,892 as of Jan. 1, up by 11.8 percent from the same day a year earlier.

Vietnamese were the largest group of overstayers, at 15,561, followed by South Koreans, according to the agency.

The agency also said the number of foreigners who applied for asylum last year was 10,375, down by 118, or about 1 percent, from the previous year.

Last year, 44 individuals were granted refugee status, two more than the number in 2018.

Thirty-seven foreign individuals were permitted to live in Japan on humanitarian grounds although they were not given refugee status, the agency said.